Don’t Judge A Book By The Cover

Sixteen years ago, I met Sarah Frey (pictured above). She was the 2004 recipient of the annual scholarship that my sister Jackie and I created in 2001 to honor our mother while she was alive. The Frieda Rapoport Caplan Family Business Scholarship annually funds up to four members of family owned businesses in the produce industry to attend The Washington Conference (formerly the Washington Public Policy Conference). The conference, held each year in September, was created by the United Fresh Produce Association to bring members of our industry to Washington, D.C., to talk with our elected officials (Senators and members of Congress) about the priorities of the agriculture industry.

Members of the industry apply for the scholarship each year and an independent selection committee chooses the winners. Jackie and I attend the conference and always spend time interacting and encouraging the scholarship winners. Over the years, more than 60 members of family owned produce businesses have joined us in Washington D.C.! In the fourth year, a young woman from the Midwest was awarded the scholarship and she stood out like no other. Her name is Sarah Frey (pronounced fry).

In 2004, when I first met Sarah in Washington, frankly, she seemed very timid and too quiet to be a business owner. She was 28. I was told that she was one of the largest pumpkin and watermelon growers in America and, as a woman-owned business, she was on the radar of many of the biggest retailers in America. My friends at Walmart told me that they really enjoyed doing business with Sarah and her company. And she had hired as one of her company managers, a longtime friend of mine, Paul Fleming.

Paul confided that she was amazing and she really was a force to be reckoned with. Not only did she spend time that week on the hill talking with our elected officials about the shortage of farm labor, water rights and hours of service regulations for truckers—but later I realized I could have learned a thing or two FROM her! Although quiet in her demeanor, she was compelling, knowledgeable and frankly, fearless.

Over the years, I have enjoyed getting to know Sarah better. Her niece, Hilary, and my eldest daughter Alex were both selected for United’s year-long Leadership Program in 2014. So Sarah and I met up at their class graduation. When my mother passed away in January, Sarah arranged to attend the celebration of life we held in February, flying all the way out to California to attend.

When our industry was soliciting nominations for its annual Women in Produce Award this past June, I couldn’t wait to nominate Sarah for this recognition. The Women in Produce Award was created over 25 years ago to highlight and give recognition to those women in our industry who have an inspiring untold story. Little did I know when I was putting together the nomination packet that Sarah’s story was about to be told to the public.

Sarah had just completed her autobiography The Growing Season and it was published in August by Penguin/Random House. I had the incredible opportunity to listen to it last week on Audible. Talk about a compelling and inspiring story! 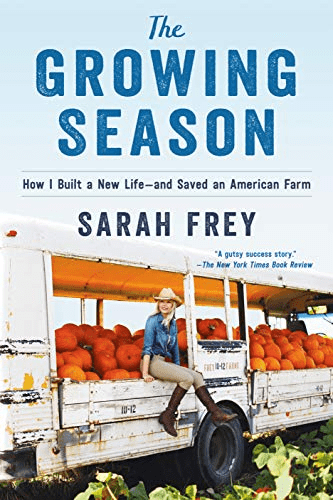 Sarah is the youngest of eight children and moved out on her own when she was 15. To support herself, she bought melons from local farmers and developed a route of delivering those melons in her pickup truck direct to grocery stores. She was so successful that she ended up buying her family farm and house out of bankruptcy! When I originally heard that she was the owner of Frey Farms and her four older brothers worked for her, I was in disbelief! But, after reading the book, I now know how it all happened.

Sarah is a survivor. She never takes no for an answer. She always finds a way to get things done. Here is a perfect example: while she was in bed recovering from the birth of her eldest son, she was interviewed by telephone by a Harvard Business School professor for a case study on how she negotiated with Walmart!

If you ever want to be inspired, especially in times like now, when many of us live in fear of being caught without a mask and hand sanitizer, I highly recommend you either read or listen to The Growing Season: How I Built a New Life—and Saved an American Farm.

Or perhaps, you will have tuned into Good Morning America this week and saw Sarah being interviewed. Or, in a few years, you may see an ABC Television/Cable series based on the book!  Just last week Sarah texted me the announcement of the deal she signed with ABC.

When I think back to that first meeting with Sarah in 2004 and fast forward to seeing her accept the Women in Produce Award earlier this year, I am in awe of how determined Sarah has always been her entire life and how much I can learn from her. Just like my mother, success came to Sarah because she never saw obstacles. How many of us put up our own obstacles? How many of us have self-talk that is negative or not productive? Next time we think we have hit a bump in the road (or a pothole), or a door has started to shut on us, let’s be a little more like Sarah. Where there is a will, there is definitely a way!