Springtime brings that general feeling of refresh and renewal, and for me that means spring cleaning and handling odds and ends.

Because I am new to the area where I live, I asked my neighbor for a recommendation for a handyman. I had set the appointment weeks in advance, which led me to believe that he’s fairly busy—a good sign.

After taking time to carefully compile a long list, last week was finally the time to meet handyman Sean. I had never worked with him before, but in less than four hours Sean had completed my long things-to-do list. I was impressed.

Even more impressive was that as he was walking through the house, he made his own list of “future projects” he could assist with another time. Wow, talk about thinking like the customer! As I was writing him a check, he said, “I made some notes of little things around the house I could help you with. And, for the scratches on your walls, I suggest you go to Target or Lowe’s and pick up a box of Mr. Clean Magic Erasers.”

Never heard of them. I wrote it down.

A few days later, I was shopping in Nordstrom and went to the shoe department. I asked the department manager if he had anything to take the dark marks off my white-soled sneakers. He told me, “You should just go to Target and buy those Mr. Clean Magic Erasers—they will do the trick!”

So, off I went to Target. 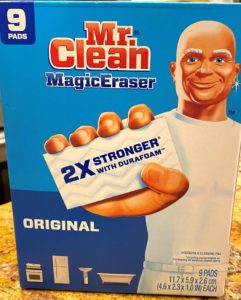 Ladies and gentlemen, I might possibly be the only person on the planet who has never heard of Mr. Clean Magic Erasers, but I am telling you—they are amazing! With a little water, I was able to get all the scratches off the walls in my kitchen. I kept going and did some of the cabinets as well. This morning, before putting on my scuffed-up, white-soled sneakers, I grabbed a Magic Eraser and cleaned them too.

As they say, it’s the little things. I hope that if you haven’t heard of Mr. Clean Magic Erasers that you will buy a box for yourself soon. They will change your life … especially since it is spring cleaning time!