Seeing the Grand Canyon for the first time

I have always heard about the Grand Canyon and that seeing photos of it, versus being there in person, is no comparison. I recall that it was one of the Original Seven Wonders of the World.

After a lot of juggling of calendars, and working around COVID-19 travel restrictions, we were able to squeeze in my first trip to see the Grand Canyon about two weeks ago.

This visit seemed like a bit of a tease, as we flew into Las Vegas on a Friday morning, drove four hours to the Canyon, and only hiked for a few hours (Friday night and again early Saturday), before heading back to Las Vegas the next morning.

We entered the South entrance of Grand Canyon National Park, and I came to a strikingly swift realization—that you could be within 20 yards of the rim of the canyon and not even know it was there! It’s true! We pulled into the parking lot near the entrance and as we got out of the car, I had no idea how close we were to the rim. We literally walked down a short asphalt path, with small plantings of trees and bushes interspersed between the pathways, and all of a sudden—there it was. It was breathtaking! And huge.

Actually, it IS huge, but it doesn’t necessarily appear that way when you are standing on the rim. The Grand Canyon itself is a mile (1.6 km) deep and up to 18 miles (29 km) wide. But if you drive the circumference, from the South Rim entrance to the North Rim entrance—it takes more than five hours! So, to drive completely around it would take more than 10 hours.

We decided to hike down at Bright Angel Trailhead late Friday afternoon. As you might imagine, it was pretty hot in the Arizona sun. The trail didn’t look that difficult to me, especially since I saw at least a dozen people who were also hiking down that path. 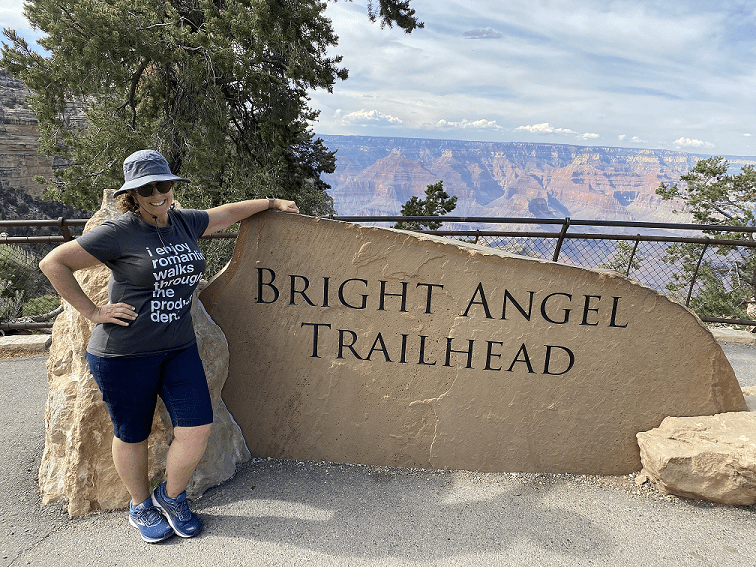 But, when we met the first hikers who were coming UP the trail, after a day of hiking and saw the look on their faces, I knew this was a serious hike. In fact, we asked two women hikers if they would take our photo for us … and they refused. They were so exhausted from their three-mile return hike, they were afraid if they stopped moving, that they would not be able to start walking again to return to the rim. That’s serious!

We ended up hiking one mile down Bright Angel and turned around and hiked a mile back to the entrance. With all the switchbacks on the trail that we had to take during that mile, I realized it didn’t even take us very far down the canyon.

That’s when I finally understood why to hike “Rim2Rim” (that’s the official name of the hike from the top of the South Rim down across the canyon up to the North Rim, or the reverse course) takes at least 12 hours. And because it is treacherous to hike in the dark, many groups choose to do the Rim2Rim in June or July, because that is when the days are the longest and you have the most sunlight. Needless to say, that is also when it is the hottest. Today the temperature at the Grand Canyon is over 90 degrees (which means it is probably over 110 degrees on the floor of the canyon, where there is no breeze). So, that two-mile hike on Friday evening was just fine for my first venture.

We got up at 6:00 a.m. the next morning to do a four-mile walk around the rim, as there is a lot of historical information and an educational pathway along the South Rim which demonstrates the 2-billion-year timeline of Grand Canyon geology. 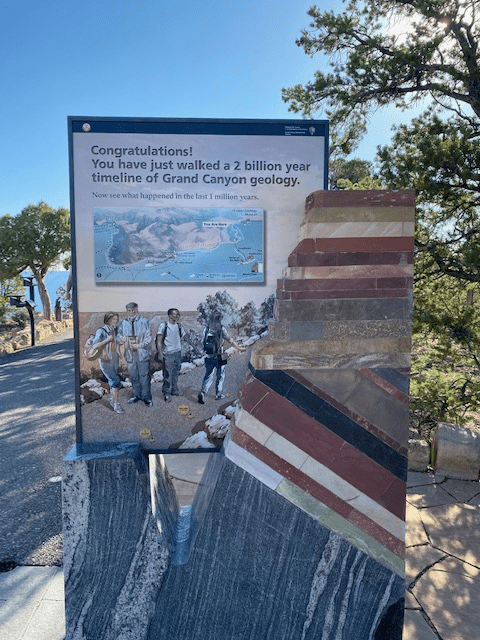 With all this being said, I highly encourage you to visit the Grand Canyon. Know that you do not need to be an elite athlete to experience the amazing vistas, the history, and the beauty of Northern Arizona. You can take it at your own pace.

But, let me tell you what I learned during my time at the Grand Canyon.

During the morning walk around a small part of the rim, on the path there were signs that said “take one large step—about 3 feet—and you will have traveled a Million Years.” 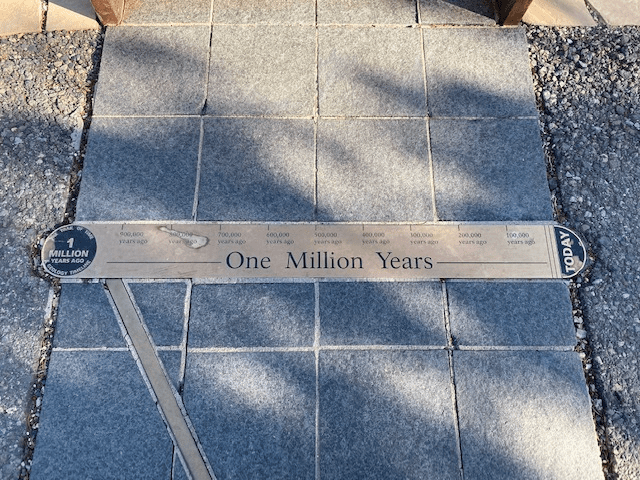 That means, this freaky year we are in right now—2020—won’t even show up in the Grand Canyon.

And that bad day you had? It’s not even a blip on the geological timeline. 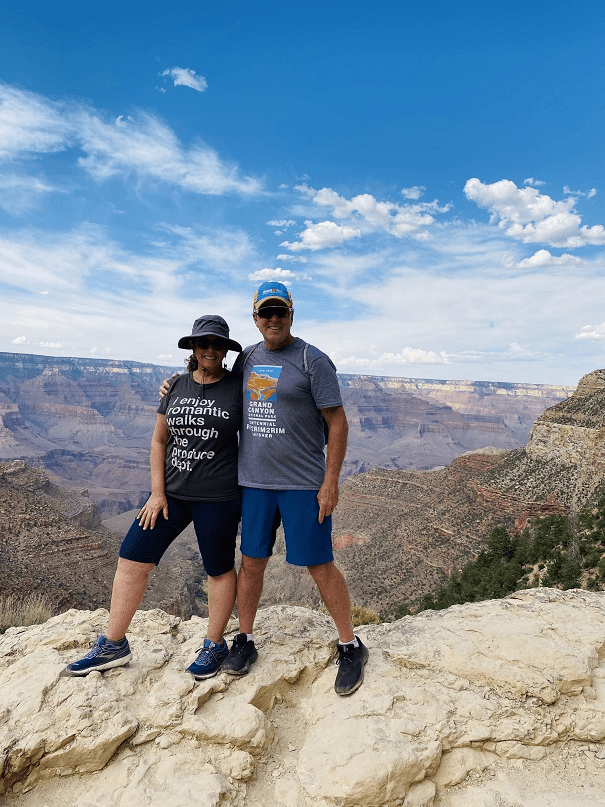 It really put things in perspective for me. I find that when I am having a rough day, a rough week, or even a rough few months, that all I have to say to myself is “GC”—Grand Canyon. It puts it into perspective.

And that’s why I recommend you make time to go visit the Grand Canyon. Go with at least one person who you can share the experience with. And allow some time for you to walk slowly, to meditate, to journal if you want. I was not surprised that we came across a robed monk seated cross-legged on a rock meditating in the early morning hours. 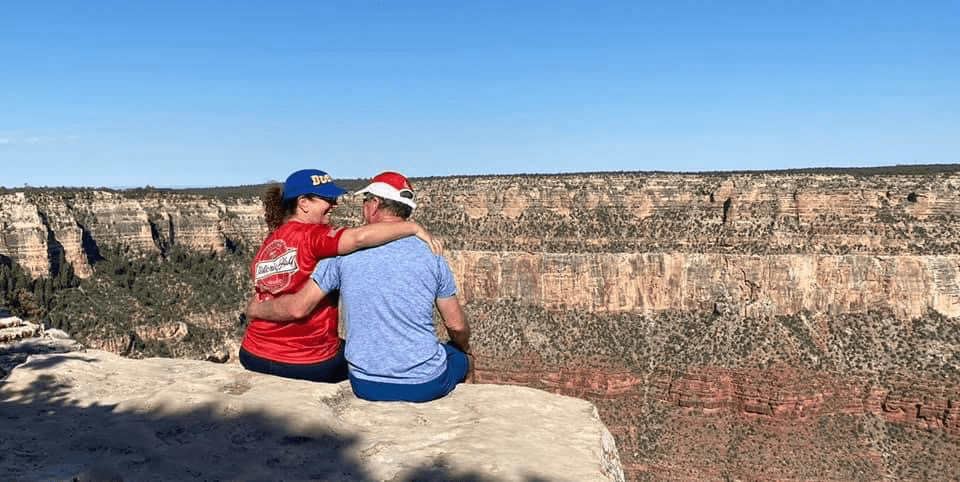 It is truly a heavenly place.