Last weekend, Garry and I visited Charleston, South Carolina. It is a beautiful place and we were fortunate to stay at our dear friends’ townhouse on Kiawah Island.

As can be expected, I was on the hunt for some fabulous places to eat. One of my new favorite newsletters, John Mariani’s Virtual Gourmet, had just featured some great looking restaurants in Charleston. During our trip, we chose to eat at The Grocery, one of the featured restaurants.

I knew to expect some fantastic tasting meats – and the beef and pork dishes we ordered were to “die for.” But there was something missing. Who stole the veggies? The appetizers and first courses were sparse on fresh vegetables, so I thought maybe this was an aberration. After all, John had written that it was primarily a charcuterie.

So, the next night, we dined at the Ocean Room at the Sanctuary Hotel, a large, Southern-inspired estate that reminds me of the Grand Floridian at Disney World in Orlando. It is magnificent to walk through. But, again, when looking at the menu, I was surprised that most of the vegetable choices were potatoes. Don’t get me wrong — I do like potatoes, and have many friends who are potato growers, but I was looking for broccoli, beets, green beans, asparagus, carrots…or something crunchy and not starchy.

As it turns out, I had a couple of revelations during this trip to the South. We have a long way to go to change the eating habits of Southerners. Almost everything I ordered was greasy or oily. Too much butter or oil in the pan. When I asked them to hold the sauce, cook things lightly, or not use butter – I would get a strange look, as if I was un-American!

Although the top chefs from this region are famous for their high-flavor foods, I hope they will consider the health of their clientele and provide some leadership by featuring more fresh fruits and vegetables on their menus. It’s no wonder that we continue to have a serious obesity problem with many of our fellow Americans… And we aren’t getting any help when we go out to eat.

After Southern food celebrity Paula Deen announced that she had diabetes and planned to make some serious lifestyle changes, I thought we would start to see some changes in the South.

For fear that my Southern friends think I may be singling them out – I do need to share that earlier this week I had a dinner meeting at Wolfgang Puck’s famous SPAGO Restaurant in Beverly Hills. I was a bit disappointed that there were few vegetables served at our dinner. My friends who had steak had a few baby Brussels sprouts on their plates and I counted four baby carrots under my salmon.

I hope this is not a trend with cutting edge chefs. They seem to be cutting back on fresh vegetables instead of adding them. If you want to see more fresh veggies when you go out to eat, please join me and let chefs, restaurant owners and servers know that you want them!

The great thing about traveling so much is catching up on my reading during a long flight.

In the produce industry, we have many trade publications. We have newspapers like The Packer and The Produce News, and magazines like Supermarket News, Progressive Grocer and California Farmer. We even have an online video resource called AndNowUKnow.com. And I definitely get funny looks on the airplane when I am reading Valley Potato Grower Magazine, Produce Business and Fresh Cut.

When I was thumbing through a recent edition of Supermarket News, a headline caught my eye: “Consumers ‘Ask Karen’ About Food Safety.”

Turns out “Ask Karen” is the food safety website created in 2004 by the U.S. Department of Agriculture’s Food Safety and Inspection Service for consumers to ask any food safety question they may have.

If you can’t find the answer to your food safety question in their FAQs, you can email your questions and wait for a response, or you can “live chat” with an AskKaren.gov representative. They even launched a mobile site for Android phones and now have a mobile website: m.AskKaren.gov.

Surprisingly, some of the FAQs aren’t about produce. Most of them are about thawing meat, code dates versus use by dates and refrigeration.

Although, one thing is for sure—it won’t be this Karen answering your food safety questions on AskKaren.gov!

Speaking of websites, my company just relaunched our website, Friedas.com, in celebration of our 50th anniversary! Be sure to check it out, as it is filled with recipes, photos, information, and much more.

My travels this week took me to Calgary in Alberta, Canada, the home of the famous Canadian rodeo, the Calgary Stampede. I was in town for the annual Canadian Produce Marketing Association Convention, where I spent a few days with 1,500 of my closest Canadian produce friends.

As with all produce conventions, there were world class speakers and the speaker at Thursday’s lunch was no different.

His name is Anthony D. Williams, the author who wrote Wikinomics (2007) and taught us how mass collaboration was changing the way companies communicate, compete and succeed.

Macrowikinomics, his latest book, teaches us that, “in every corner of the globe, businesses, organizations, and individuals alike are using mass collaboration to revolutionize not only the way we work, but how we live, learn, create, and care for each other.”

I have not read his books yet, but I was fascinated by the examples he gave about the cultural shift in the way people are collaborating, resource sharing and solving problems at a much more rapid speed than ever thought possible.

As his first example, Anthony used the major oil spill, in which the cold waters on the ocean floor made the oil turn to sludge, halting the clean up efforts. The problem was posted on innoCentive, a global network of 300,000 scientists who help problem solve. A scientist in the cement business offered an easy solution and solved this major crisis, allowing the clean up to resume.

Have you heard about freelance service providers, like Elance and Odesk? These professional service marketplaces have more than 40 types of work listed with 1.5 million freelancers. You can negotiate with them directly and approve their work before payment.

And Flipped High School is revolutionizing education by allowing students to get lectures at home (via video) so they can do homework in the classroom. This new method, used in a Michigan high school, has significantly improved comprehension and student engagement.

But, I have to say, the idea that amazed me the most was a product developed just a few years ago called Spiroscout. Basically, it attaches a GPS device to asthma inhalers to track the frequency and location of asthma episodes! For modern medicine to have real, collaborative data about the causes and occurrences of asthma attacks is impressive and meaningful to those who have, or know anyone who has, asthma. (My daughter, Sophia, suffered from asthma when she was very young.)

As you can tell, I learned about more than produce during my latest trip. But, I did see some amazing yellow, orange, black and brown tomatoes, new flavorful apple varieties, big and little potatoes and a lot of dragon fruit. Canada is a huge melting pot of cultures with plenty of fresh produce to enjoy.

There is a lot we can learn from our northern neighbors!

I’m not referring to sports teams here. I’m talking about airports, and the food choices available.

I have been spending a lot of time in airports lately, and my personal choice is to always eat fresh fruits and vegetables and gluten-free products, so I pay attention to what is offered.

When I was in Chicago’s O’Hare International Airport last month, I was astounded by the healthy food options that presented themselves: cut fruits and veggies, hummus and veggies, fresh fruit juices, unsalted nuts, gluten-free snacks and fruit smoothies. Multiple kiosks in each corridor of the airport offered many healthy dining options. 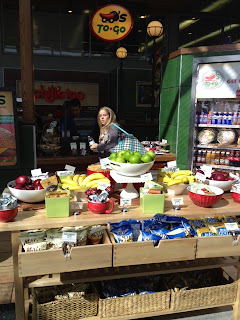 Then, this past week, I spent a lot of time at Dallas/Fort Worth International Airport — thanks to the tornado activity. Although fresh salads were available in many terminals, I did not find a lot of variety when it came to just plain old fresh fruits and veggies and other healthy options. (In full disclosure, I will say that I found many displays of the basics: fresh whole apples, bananas, and oranges.)

So what is the difference between these two major hubs. Is it lifestyle? Texans are well known for their “steak and potato” propensity.

Is it the politics? Chicago is a well-known bastion of Democrats and liberals. Dallas is known to be more conservative and Republican.

Or is the airline that has the hub there driving the food choices? United Airlines in Chicago and American Airlines in Dallas.

I can tell you that as a consumer, a mom, and a fresh produce advocate, I want more fresh choices when I travel.

I feel better when I eat healthy during my plane flights. I find myself packing or purchasing fresh snacks before I board so I am not held hostage to what the airlines offer — mostly crackers, pretzels, candies and cookies. There is not much fresh produce offered by the airlines. What happened to the small bags of carrots that United Airlines used to give out?

I hope you will all agree that offering healthy options at airports and on airplanes is a good idea. Feel free to offer your comments or special requests to all the major airlines: