Last week, in my ongoing quest for “continuous learning,” I attended the UC Davis Agribusiness Executive Seminar in Newport Beach. I have been attending this biennial year 2.5-day seminar for the last 15 years. It is patterned after the Harvard Business School Agribusiness Seminar and uses case studies on businesses written by professional case study writers. As part of the seminar’s method, the CEO (protagonist) comes to the group to defend his/her business decisions and plan. Attendees at the seminar are sent the case studies in advance. We are expected to read them and be prepared to discuss them and to challenge the protagonists.

We had six case studies this year. One of the most interesting was about Raley’s, the privately owned supermarket-chain based in Sacramento, California. Chairman and Owner Michael Teel and his CEO, Keith Knopf, came to speak with us and “defend” their business position.

While I cannot divulge the details of the case study (we take a pledge of confidentiality), I wanted to share what is public knowledge.

Raley’s currently has about 121 stores, and about five years ago, Michael Teel decided to shift the operating strategy of his company. He decided Raley’s should become a purpose-driven company and wanted to position his company as a trusted advisor to the consumers who shop in his stores.

They call it “The Raley’s Way.” On the company website’s career page, it says: “changing the way the world eats, one plate at a time.” 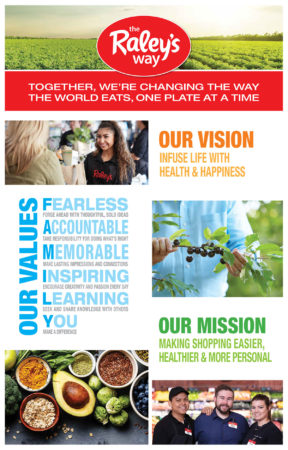 Michael told us, as he was approaching age 60, he reflected on his life and saw a thread around health and wellness and alternative medicine. He made a connection between the products his supermarkets sell and the (poor) health of consumers. In his mind, the connection was not a positive one. Meaning, he was struck that the sugar and salt-filled foods and the choices his stores offered to shoppers were affecting their health in a negative way. That’s when he made the decision to shift his strategy and to be purpose driven.

Over the last five years, Raley’s has made some very dramatic changes. He removed candy from the checkout lanes and replaced it with healthier snacks. He stopped selling tobacco products in his stores and gave priority display space to the healthiest choices on his stores’ shelves. What you may not know about the supermarket industry is that big companies (we call them CPGs – Consumer Packaged Goods) seem to dictate what is sold in stores, because of the attractive incentives they give to retailers to stock those products. And if products are on the shelves at the store, consumers tend to buy them.

Michael saw that he could offer healthier choices. And that meant, he and his leadership team had to go against the conventional supermarket wisdom. Instead of listening to the recommendation of CPG companies, they started to make decisions based on being a trusted, health-oriented advisor to his shoppers.

Since Raley’s is a for-profit business, so you might ask yourself: Did his decision to change what was sold in his stores pay off? Or was this just a “feel good” move? Well, it was kind of both.

Initially the company sales took a dip. So, Mike and Keith and their management team made some adjustments to their plans, and during the course of the last five years, their company has become more profitable and their market share has grown! When they both got up to speak about their decisions, their company’s performance, the alignment in their management teams and their commitment to changing the way the world eats, the passion and caring was oozing from them.

I know there are other small and medium-sized supermarket chains in America that have made a similar decision to focus on healthy foods and lifestyles. I can’t help but think about regional retailers in the Northwest, like New Seasons, Town and Country and Green Zebra. And of course, chains like Mrs. Gooch’s and Bread & Circus (both purchased by Whole Foods more than 20 years ago) that helped Whole Foods become a national natural retailer.

But what is different about Michael Teel and Raley’s is that this is a third-generation family business with a long legacy of being a middle market retailer – long before Aldi, Costco and Walmart. As the succeeding grandson, Michael quickly figured out that being in the middle is never a good strategy.

To me, it was truly an example of not only putting your money where your mouth is, but showing, real time, that you can do well by doing good.

My hat is off to Michael, Keith and their entire team for making a commitment to being a purpose-driven company and sticking to their commitment. And for helping change the way the world eats, one plate at a time.

I feel like the word “gratitude” has become the latest buzzword. Everyone is using it. And when that happens to a word or phrase, it can dilute its meaning or intention.

For me, showing gratitude means authentically being appreciative. Whether it is saying “thank you,” or writing a thank you note, or even smiling at someone with a twinkle in my eye and a nod to show that I appreciate them, it has to be authentic.

It’s not a go-through-the-motions kind of gratitude. You know what I mean: the mandatory thank you note you write after a job interview or after you receive a gift. It’s deeper than that. And if you are writing a thank you note, your choice of words can make all the difference in the world. Just last week, I attended a produce conference luncheon, during which the speaker surprised us all by giving us blank thank you cards. She instructed us to think of someone in our life that we are grateful for, and to write a thank you note. They then mailed them for us.

That was quite a thinking exercise for me, as I was forced to think hard about someone in my life that I was grateful for (and I didn’t want to choose the ordinary options, i.e., family members). I wrote to a dear friend of mine who has been incredibly supportive of me in a nonprofit we both are involved in. I wonder what her reaction will be when she receives my card. I suspect that it will be a surprise, that it will be appreciated and that she will interpret it as an authentic expression of gratitude.

And that’s what gratitude should be.

What if everyone on the planet was willing to admit when they were wrong and asked for forgiveness?  To say, “Darn it, I was wrong,” “I would love to hear how you think that should have been handled” and “I am open to your ideas.” Clearly we can all think of some people in public life who should admit when they are wrong.

But how about at work, or in our home life? Wouldn’t it make it easier if someone who was so passionate about their point of view, took a deep breath and said, “Wow – I was wrong,” “I need your help” or “I’ve never done this before and would appreciate your insight”?

So next time you are bubbling inside with frustration or angst, try asking for forgiveness, showing some gratitude and being open to a different perspective.

Several years ago, someone asked me if there was anything I would like to change about the produce industry. I didn’t even pause when I answered, “Change the grades and standards of fresh produce.”

Years ago, a system was put in place that basically meant only perfect-looking produce would be sold in supermarkets.

You can see the result by walking into any supermarket produce department. Every apple on display is the same size, looks identical and is blemish-free. The tomatoes are all red and identical in size (unless they are heirloom varieties or yellows). And that applies to almost all fresh produce.

As American consumers, we have come to expect perfect-looking produce because it creates a lot of appetite appeal. After years of conditioning, supermarket buyers believe that consumers will not purchase anything but those perfect-looking fruits and veggies.

Then came talk of sustainability, food waste and hunger. We Americans became almost instantly aware of the fact that, according to the USDA, 30 to 40 percent of all fresh food goes to waste somewhere in the supply chain (between farmers’ fields and consumers’ trash cans or compost piles).

Predictably, a few entrepreneurs started businesses to market the produce that was going to waste—that 30 to 40 percent that was not making it onto consumers’ plates.

Companies like Imperfect Produce, Full Harvest, Hungry Harvest and Misfits Market sprang up. Produce brokers and marketers launched lines of off-grade products. In France, one supermarket chain, Intermarche, even ran this memorable commercial in 2014 to promote its line.

As per usual, it made great headlines.

Five years later, just this week, I read this headline in our trade papers:

“Grocers Turn Away From ‘Ugly Produce’“

The article goes on to say many supermarkets are ending tests with ugly produce because customers aren’t purchasing the product as frequently as they had hoped. Some retailers reported inconsistent interest on the part of consumers.

Does that make sense? That consumers who are concerned about hunger and eliminating food waste would not flock to supermarkets to buy produce that is a little bit less than perfect in appearance, but has the same taste, flavor and nutritional values?

Obviously, I don’t have all the answers. Many factors could have affected the outcome, such as how attractive the packaging was, what educational tools the supplier offered to inform consumers, where the product was displayed, pricing strategy and supply consistency, just to name a few.

In doing some research for this blog, I uncovered this interview with crop scientist Sarah Taber, entitled “A scientist on the myth of ugly produce and food waste.” If you have time, I encourage you to take a few minutes to read her point of view; she calls bullshit, by the way.

Why do I think ugly and imperfect produce is being taken off the shelves of conventional supermarkets? Ugly produce looks great in highly curated shots on social media, but the far real version found on store shelves just doesn’t have the same appetite appeal. Consumers still shop with their eyes, which means it will take longer than four to five years for this to catch on. A program like this will require the supermarket industry to be patient rather than cater to the instant gratification consumers expect with new programs.

These imperfect produce companies are most likely ahead of their time. Based on my company’s 57 years of experience introducing new fruits and vegetables to American consumers, I know, for a fact, that it takes around 15 to 18 years for a new product to catch on. Think kiwifruit, dragon fruit and even kale. I spoke about the life cycle of new product introductions in my speech at trend conference #BittenLA in 2016.

I believe alternative channels need to be developed for less-than-perfect-looking produce. Why not sell that product to food processors or restaurant suppliers who are going to chop it up anyway? Trying to get conventional supermarkets to retrain their quality control inspectors, produce managers and management on what is acceptable condition is an unlikely recipe. Why not develop relationships with markets that are already selling cheap produce that doesn’t always look perfect? I recognize that it takes extra time to develop relationships with these alternative channels, but they seem the most practical path for getting imperfect product to consumers.

I predict that some companies will pull back from offering ugly produce, creating a dip in the product life cycle, but the desire for developing alternative markets to move less-than-perfect produce will continue. Call me in 10 years and I think you’ll find a whole new supply chain has been created and we have significantly less food waste.

And that’s a goal we can all support.