Every once in awhile you come across a small book that has a big message. That’s what happened to me a few weeks ago.

My mom Frieda and I are both voracious readers, and oftentimes we give recommendations to each other when we find a jewel. I was visiting her, and she handed me this small blue book with the title Ikigai: The Japanese Secret to a Long and Happy Life. 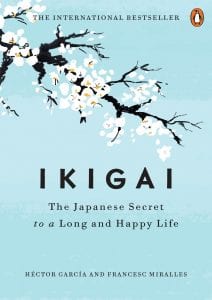 The cover touts the book as an International Bestseller, yet I had never heard of it. Mom said, “The message is very interesting.” And if my mom, who is 96 years old, says a book on the secret to a long and happy life is interesting, then I figured it was worth a read. It felt like Yoda was talking to me.

The authors, two practicing therapists—one from Barcelona and one from Japan—who had read each other’s work but had never met, were put in touch by a mutual acquaintance. They spoke about trends in Western psychology and specifically logotherapy, which helps people find their purpose in life.

The opening page features this quote: “Only staying active will make you want to live a hundred years.” —Japanese proverb

And that is the essence of the 185-page book. The chapters are simple and short, with titles like: “Ikigai: The art of staying young while growing old;” “Antiaging Secrets: Little things that add up to a long and happy life;” and “Find Flow: How to turn work and free time into spaces for growth.” There are chapters about “gentle movements”—exercises that promote health and long life (such as yoga, tai chi and qigong) and the “Ikigai Diet” highlighting the Okinawa purple sweet potato-based “miracle diet”—the way the residents of Okinawa eat that gives them the largest population of centenarians in the world!

In essence, we all have our own life’s purpose, our personal ikigai. The book is filled with suggestions on how to make space in your mind and your heart to help you find your purpose. “There is no perfect strategy to connecting with your ikigai. But what they learned from the Okinawans is that we should not worry too much about finding it.”

The book concludes with the 10 rules of ikigai:

As we enter that holiday season which seems to be about giving thanks and sharing love, it is a perfect time to start reflecting on what truly makes you happy.  Physically, mentally, socially, professionally.

After reading the book, I was able to pause and reflect on the importance of loving your life, those who you spend time with and what you want your legacy to be.

This book would be an excellent gift to share with someone you love. I know many professional coaches who buy them by the dozen and give them to their clients! Why not share the book with your friends and loved ones?

Held at The Anthem in Washington, D.C., the event mobilized more than 2,000 attendees who roamed throughout 80 DC-area restaurant stations. Chef Jose Andres, named the 2018 Humanitarian of the Year by the James Beard Foundation, hosted the event. He’s known for his work to end hunger and poverty by using the power of food to empower communities and strengthen economies.

(Spoiler alert: This blog has some very interesting information especially for men, people who like men, and men’s bodies. Read on.)

Last weekend, before a night on the town in Las Vegas with three girlfriends, we went to dinner. My friend Betsy told me how she picked the restaurant we went to. She knows I am vegan, so she reviewed all the top restaurants in the city (she’s a foodie) and evaluated who had the best vegan menu. I had no idea that restaurants in Las Vegas have separate vegan menus. But Sinatra Restaurant (Sinatra Dinner Menu) at the Encore had fabulous vegan options. I later learned that famous owner—Steve Wynn—is vegan, so he makes sure all his properties offer plant- based options.

As we sat down to dinner, Betsy said to me, “Have you see the movie ‘The Game Changers?’” I had not, and I found out it is a documentary released within the last month that highlights the facts and benefits about living a plant-based lifestyle. It uses testimonials from some of the highest performing athletes in the world (who, by the way, are—surprise, surprise— vegan!). Think tennis goddess Serena Williams, bodybuilder and lifter Arnold Schwarzenegger, runner Morgan Mitchell, Tennessee Titan football star Derrick Morgan, ultra-marathoner Scott Jurek, and cycling champ Dotsie Bausch, to name a few.  Watch the trailer here:

It’s interesting that when you choose a plant-based diet, the very first thing you are asked by curious friends and acquaintances is “so where do you get your protein?” I’ve experienced this scenario myself multiple times. I calmly share that I get enough protein from the fruits, veggies and nuts I eat and that I have tons of energy. Most people roll their eyes at me, and I can practically see their thought-bubble that says “that just can’t be true!” But I believe this fact, especially after watching some of the most fit and competitive athletes in the world share their stories about how their recovery times are faster, how they have less inflammation, they sleep better, they win more competitions and set new performance records. I will never have another worry when asked about my protein intake.

The movie “The Game Changers” was quite clever; it’s based on the premise that the biggest contingent of meat eaters (think steak) is probably men. So, many of the examples and case studies in the film feature men.

A portion of the film shows an experiment they did with three male college athletes during which they fed them a meal with meat and the next day a meal that was only plant-based. The experiment took place as a sleep study, during which time they measured the size and frequency of the erections the men got while they slept. (Size and frequency was measurably better when they ate a plant-based meal)

Of course, in the movie most of the people featured are 100% vegan … but when Arnold Schwarzenegger was on screen, he proclaimed that starting with one meal a day or one meatless day a week works well as a start. That was one of the best points of the film—sharing data about performance and health, but not in a preachy way. We all have to make decisions that feel right to us. And we all will move at our own pace.

So, if you are interested in having less inflammation and pain in your body, having more energy, improving your physical performance and endurance, looking younger, feeling less bloated after you eat, helping the planet by reducing waste and pollution caused by animal ranching, then I encourage you to watch the documentary “The Game Changers”. It’s available on Netflix … and is less than 2 hours long.

If nothing else, you might want to watch the scene in the movie with the three college guys and their “sleep study.”