A Visit to Pearl Harbor

I would imagine that most of us were not around on December 7, 1941, a day that will live in infamy. That was the day that the Japanese bombed Pearl Harbor on the island of Oahu.

The only reason that I know something about Pearl Harbor, is that when I took an oral interpretation class in 7th grade, I had to pick a speech and give it to the class. The speech I chose was that of President Franklin D. Roosevelt, given on December 8, 1941 to Congress.

During our recent visit to Hawaii, I had the opportunity to visit Pearl Harbor for the first time. In my more than 40 years of traveling to Hawaii, I wonder why I never visited this amazing place of American history.

The Pearl Harbor historic park is made up of several different memorials which are all part of the recently dedicated WWII Valor in the Pacific National Monument. Although the main visitor center was under construction during our visit, there were still so many things to see and experience. We watched a 20-minute film that gave us an overview of the events of December 7, and the place was adorned with many banners highlighting soldiers, survivors and heroes.

We also visited the USS Bowfin Submarine Museum, and were able to board the sub and tour the interior. (First launched in 1942, the Bowfin sank many enemy ships during the war and was nicknamed the “Pearl Harbor Avenger.”) I highly recommend the audio tour, as it really explains the details of how the sailors lived and how the submarine functioned. It is an amazing piece of technology for being more than 65 years old. (Also on the Pearl Harbor campus is an aviation museum with actual airplanes that were flown during that time period.)

However, the most moving part of visiting Pearl Harbor was taking a boat over to the USS Arizona Memorial. The USS Arizona Battleship was bombed the morning of December 7 with hundreds of crew members on board, and it sank right in Pearl Harbor. What is so touching and meaningful about this memorial, is that it was constructed right over the hull of the actual wreckage site. As you stand there (many of us had tears rolling down our cheeks), you can see the rusted remains of the ship in the water below – which is the final resting place for many of the crewmen. 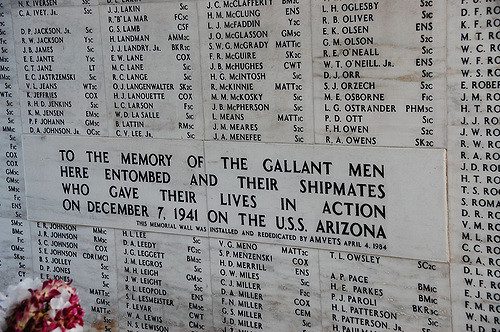 The memorial is operated by the U.S. National Park Service, and it was amazing to hear the guides announce that NO CELL PHONE usage (including NO TEXTING) would be permitted on the ferry boat to the memorial, or while in the exhibit building. There were many teens and adults on our boat, but I heard no grumbling about this announcement. All of us were so moved by being on the actual site of such a disaster that it just added to the mood of somberness. 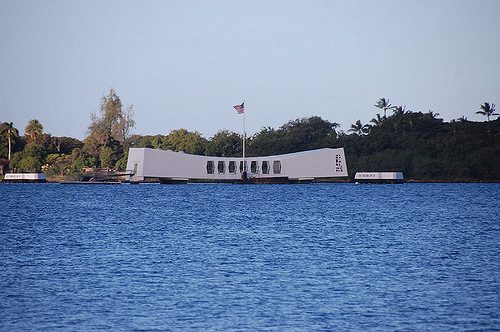 History comes alive for us when we have the opportunity visit places like Pearl Harbor. On your next visit to Hawaii, I encourage you to take a full day and visit this important historical site. Even if your kids whine or complain, it is such an important part of our history, and so many people gave their lives that it is a “must-see.” The beach and the Mai Tais can wait.