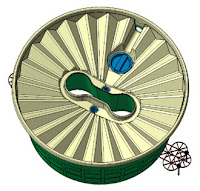 I read a lot of publications, but one of the most interesting magazines I receive is California Farmer. I have quoted Editor Len Richardson a couple times before. (Read my previous posts here and here.)

I was intrigued by Richardson’s December 2010 story about the Groasis Waterboxx, which was named by Popular Science magazine as one of the top inventions of 2010.

Clearly our biggest challenge in feeding all the people on the planet is having enough water. Without sufficient water supplies, we cannot grow the crops we need. Or, so I thought…

The inventor, Pieter Hoff (from the Netherlands), created the Waterboxx out of personal necessity. He was the largest grower and exporter of lilies in Holland and sold his company in 2004. As he traveled around the world and saw flora and fauna disappearing from erosion and drought, he decided to invest in a solution.

You can find out all the details on the Waterboxx website and YouTube page, but briefly, the Waterboxx is 20 inches in diameter and 10 inches tall. It sits on top of the soil and is filled with water once, and that’s it.

The Waterboxx is about the size of a tire and uses condensation to make plants grow without irrigation. The device gives plants just enough water to survive, which encourages the roots to grow deeper into the water table (which results in fewer weeds).

This amazing invention is now being field tested in Spain, Kenya, France, Chile, Ecuador, Morocco and in California at the Mondavi Winery in Sonoma. Margrit Mondavi, widow of the famed Robert Mondavi, called it “The greatest invention since electricity,” according to the article.

What is especially egalitarian about this invention is that Hoff did not patent it. He wants to produce the boxes locally and wants everyone to make and use them. If you want to reproduce them, just contact him at info AT Groasis dot com. He needs a license fee to continue his research.

Imagine the ability to grow food in the deserts of the world, without an inventor trying to become a millionaire in the process. That is refreshing and exciting to me.

And now you know!
Karen

Are Thank-You Notes Still Relevant? Why I Shop Locally Winning
Previous | Next

Are Thank-You Notes Still Relevant? Why I Shop Locally Winning