Artisan Lettuce and why your comments matter 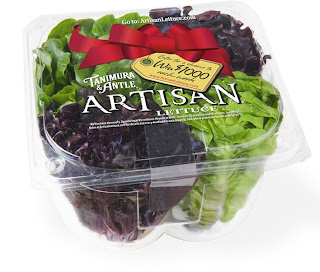 As I’ve shared before, the produce industry is not made up of fruits and vegetables. For me, it’s made up of personalities, families and friends. When I think of a particular fruit or vegetable, the first thing that comes to mind is the good friend or acquaintance who happens to grow it.

And that is the case with a relatively new product, Artisan Lettuce.

You’ve probably seen this product in your local produce department, sold near the rest of the salad greens. It’s a combination of green and red lettuces — unusual varieties like Tango, Gem and Oak. You can see photos and descriptions here. The whole heads are packed in clear clamshell containers, which serve as a kind of Tupperware storage unit. It’s brilliant!

While many other salad growers are cutting and processing their lettuces into bagged salads (personally, I can always taste that they’ve been pre-washed), my friends who grow these artisan varieties chose to go in a different direction. They said: Let’s grow some colorful, flavorful lettuces and pick them small and at their peak, pack them in the field, and then package them so the consumer gets the least-processed, freshest experience! Voilà! Artisan Lettuce.

So, let me tell you about my friends.

Rick Antle, the son of the founder, has been a longtime friend of mine. We served together on an advisory board of Cal Poly-San Luis Obispo and he is now Chief Executive Officer of Tanimura & Antle. Rick married one of my closest friends, Tonya, about 10 years ago, which has facilitated our paths crossing even more often.

So, it’s not unusual for us to see each other not only at industry events, but at family events as well. So, when I saw Rick and Tonya at a produce convention in October, it was a delightful surprise to hear Rick’s story of his latest flash of brilliance.

Rick said, “Karen, I got an email from your mother a few months ago. She was raving about receiving a clamshell of our new product, Artisan Lettuce. She went on and on in her email about the great flavor and the amazing shelf life. It was a gift from one of her friends, and it apparently took her a few weeks to consume the whole package, since she lives by herself.”

Rick continued: “Frieda told me in her email that she was going to tell her friends that it was the perfect housewarming gift!”

He told me that after he received Frieda’s email, her comment about the Artisan Lettuce being a “perfect housewarming gift” kept going through his head. It inspired him to change the packaging and put a big red bow on it, and tell consumers that it’s wrapped for the holidays and perfect for entertaining! The company also created a consumer sweepstakes promotion around the theme – Season’s Bringing.

So, an email from my mom helped launch this great promotion for an amazing-tasting product!

And that’s how it often happens in our business. Someone gets a comment or idea from a seemingly random conversation, and eventually, it shows up in your supermarket!

So, as you are considering a way to make your holidays more interesting (flavor wise), try these rich and flavorful lettuces! And, if you like a product, don’t be afraid to send an email to the company with your comments or suggestions. You never know what will become of your comments!

P.S. Speaking of comments, why don’t you share your thoughts and ideas in the comment form on this blog?!