Recently I met Dan Buettner, the New York Times best-selling author and National Geographic writer of “The Blue Zones of Happiness.” I have since become fascinated with his discoveries for living a longer life.

In case you aren’t aware, blue zones are regions of the world where people live much longer than average (usually to over 100). The term first appeared in the November 2015 National Geographic  magazine cover story “The Secrets of a Long Life,” which Dan wrote.  He identified five geographic areas around the world where people live statistically longer: Okinawa (Japan); Sardinia (Italy); Nicoya (Costa Rica); Icaria (Greece); and among the Seventh-day Adventists in Loma Linda, California. Based on empirical data and firsthand observations, Dan offers an explanation as to why these populations live healthier and longer lives. 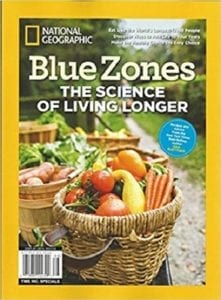 I became aware of the “Blue Zones” book when we started marketing and selling our Stokes Purple® Sweet Potatoes in 2011. We started getting an overwhelming number of emails and phone calls from consumers who were going crazy to find our purple sweet potatoes. They told us that purple sweet potatoes were highlighted in Buettner’s book as the food people in Okinawa ate that helped them to live significantly longer lives.

Well, my dream came true when I met Dan in July. He spoke at the Organic Produce Summit in Monterey, California. I snuck my way into the green room before his presentation to say hello and tell him the impact his book had had on our company.

Then I heard him speak. He started his presentation by asking the audience to answer “yes” or “no” to the following nine questions. At the end, he asked us how many we answered “yes” to:

As Dan asked us all to raise our hands, many of us commented to each other about how we should rethink or modify some of our current behaviors.

I recalled that earlier this year I had changed my diet to mostly plant-based, using seafood and egg whites as my protein source (no red meat or poultry). I started a daily meditation practice a year ago and added hot yoga to my weekly routine this year. I recently reconnected with many of my close friends and make a concerted effort to allow time for my family every week. (I am quite lucky that I work with both my daughters, who indulge me with a morning hug each day.)

If you are curious about what it would take to modify your lifestyle (diet, exercise, etc.) to live a longer life (of over 100 years), National Geographic just issued a special publication entitled, “Blue Zones: The Science of Living Longer.” Part 1 is information on the five blue zones around the world and what foods and lifestyles are enjoyed there. Part 2 is how to create your own blue zones. Part 3 is about cooking in the blue zone with recipes and shopping lists. I purchased my items at my local grocery store.

I don’t know about you, but every year around my birthday, I think about my own mortality. This also makes me reflect on the lifestyle changes my parents made as they got older, and, for my mom, as she continues to get older. When I was young, like most people, I was more reckless and felt immortal.

Now I’m mindful of the choices I make and what impact they may have on my mortality: better-for-you food choices; more rest; more exercise; more enjoyment; less stress; smaller meals; sipping red wine; and enjoying long conversations with friends and family.

I plan to continue to make mindful choices to help create my own blue zone. Perhaps you will, too.