I remember many years ago, the only bell peppers I could find in the produce department were the green ones. Red bell peppers were few and far between. And when you did find them, it was usually because the farmer had left his peppers on the vine too long and they turned from green to red (indicating maturity).

When Frieda’s was still on the Los Angeles Wholesale Produce Market, we would occasionally get red bell peppers, but we had to sell them fast, because they were riper than the green ones and wouldn’t last long. At that time, all of the bell peppers were grown in open fields (no greenhouse-grown peppers), meaning they were probably only available in the spring and summer, when the weather was warm enough.

Now, colored bell peppers are available in produce departments 365 days a year. They come in many colors besides green. Red peppers are joined by yellow and orange varieties. Most of these three colors of peppers are grown in greenhouses in California, Arizona, Colorado, New Jersey and across Canada. (We also import purple and white bell peppers from Holland.) 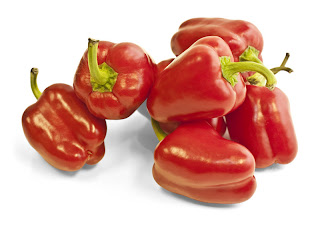 Did you know that many of the first commercially-grown colored bell peppers were air freighted to the U.S. from Holland? Holland was a pioneer in the field of greenhouse and hot house farming, and was the first to commercially grow colored bell peppers, tomatoes and many other vegetables. Now there are greenhouses in Spain, Morocco, Israel, and many other countries — and they all export their fresh products around the world, often times to cooler-weather countries that don’t have year-round supplies.

One pioneering U.S. company, Sunworld International, introduced the first elongated sweet pepper in beautiful red and yellow colors. They were called La Rouge® (red) and La Jaune® (yellow) Royale Peppers. They were my favorite peppers because the skin was thin enough that I could eat them raw (I did not have to roast and peel them before using). They stopped growing them about 10 years ago.

Recently I heard from my good friend, David Marguleas, vice president of Sunworld, that his company is growing and marketing the Royale Peppers again. I was so happy to hear this! 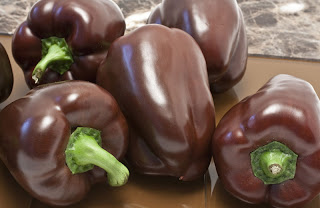 So, no matter what, at this time of year, you can have a great time with all the colored peppers in your market. It is the peak of season for farmers, which means they are perfect for the summertime.

During the week, I slice up red and yellow peppers and take them to work for my lunch. Even my 16-year-old daughter Sophia just loves sliced red peppers — she dips them in hummus.

And for parties, I love to serve grilled peppers. I core and quarter them, sprinkle with kosher salt (it tenderizes them a bit) and brush with olive oil. Then I grill them on the barbecue for about 7 to 8 minutes on each side until they are tender and a little blackened. After grilling, I let the peppers “rest” on a platter covered in foil, so they really get tender.

So, when you are looking for something new for your veggie tray, or for grilling – try nutrition-packed sweet peppers. They are our family’s favorite.