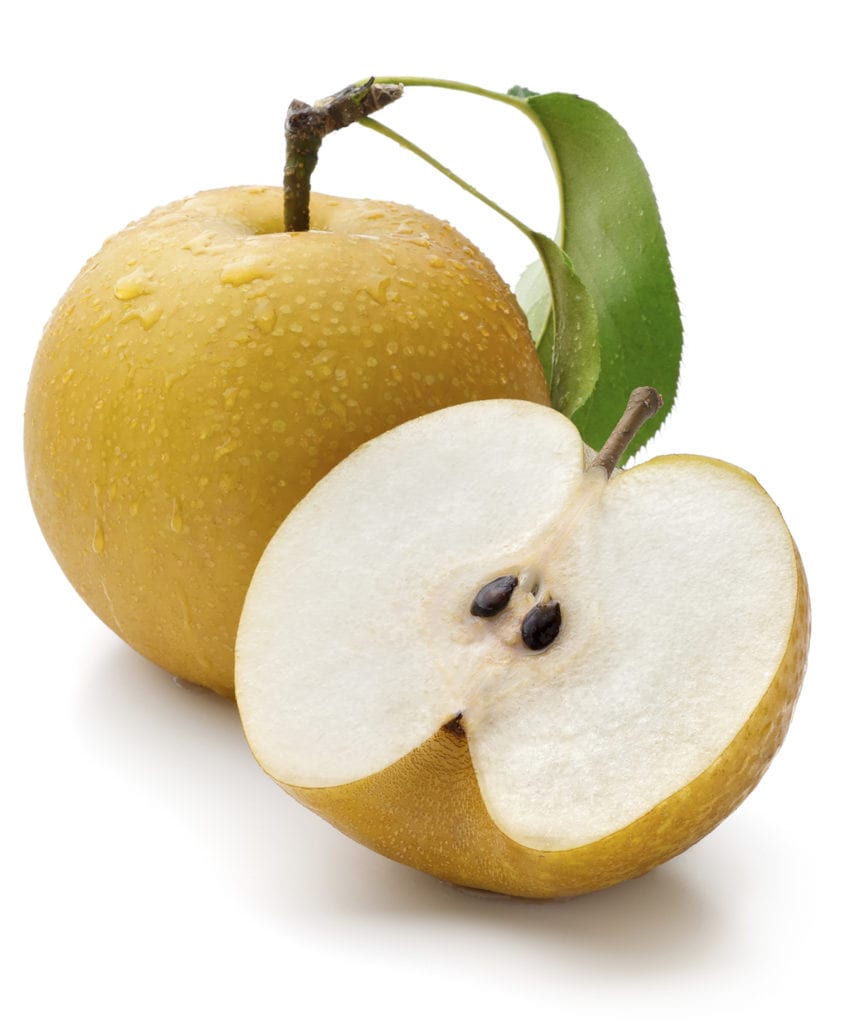 That’s how we have always described Asian Pears. Well, that’s after we changed the name to “Asian” pears.

They were originally called Apple Pears. It was shortly after I started working full time in the business with mom (in the early 1980s) that we decided to change the name. It was confusing to people…were they apples or were they pears? We decided to change the name to ASIAN pears since they were so popular with those with Asian ancestry. In Japanese and Chinese cultures, they were so special, that you might be presented with a single Asian Pear, as a gift!

The first Apple Pears were grown by our good friends, the Kershaw family in Yakima, Washington. I can still recall the excitement when the first large shipment of them arrived on the downtown Los Angeles Wholesale Produce market. They were the Shinseiki variety, which had a pale green outside skin. The skin was so delicate that sometimes they looked scratched, just from being packed into the box!

Ed and Bob Kershaw have long since stopped growing Asian Pears in Washington state, as we found that the weather conditions were not optimal.

Now, there are some amazing growers, right here in California and as far away as Virginia, who are growing many different varieties. And the domestic Asian Pear season has just begun! (There is also a large crop which grows in Chile – during the opposite season. . .but this year the crop was quite small, due to the damage caused by the devastating earthquake a few months ago).

The domestic Asian Pear season starts each year in early August and you should be able to find them in your local supermarkets now. Why are Asian Pears one of my favorite fruits? Because of their FLAVOR of course.

The brown-skinned Hosui variety has overtones of wine in its flavor profile. There are other varieties, such as Shinsui, Kosui – but you will not often see them sold with their varietal names. They will just be called “Asian Pears”.

What makes them so unusual is they almost always have a grainy texture (not like the buttery texture of most other pears, of European origins) and are not usually used in cooking. They are most commonly eaten out of hand.

Asian Pears come in all different sizes (small for kids to pack in their lunch) and large to make a spectacular statement when served whole as a dessert. They are usually big and round and many times, you will notice them protected by a Styrofoam “sock”, making them look like a gift. That sock is there to protect the fruit from rubbing and bruising the fruit (sure wish we had those socks back in the early days).

Most importantly – be sure to try one. When I am asked, “What’s the next Kiwifruit?” I often want to say that it’s the Asian Pear. It is so consumer friendly and delicious.

And, as you can guess. . .they are crunchy like an apple and juicy like a pear! Yum!