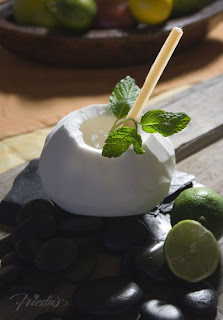 I was changing planes in Salt Lake City and I was bored. The flight was delayed about 30 minutes, so I went over to the magazine rack and started looking at magazine titles. Cowboys & Indians, Hmm, never heard of that one. Then I saw Robert Redford on the cover of Salt Lake Magazine – so I picked it up.

I attended a leadership symposium many years ago at which I heard a professor from New Mexico State University speak. He said he keeps current and on the cutting edge by picking up magazines, while traveling, that he has never read before or does not subscribe to. Over the years, and after many hundreds of flights, I have read The Economist, The New Yorker, Wired, INC., In Style, Lucky, and many others that I never would have picked up. Try it – you won’t believe what you can learn.

“Cuckoo for Coconuts” was a story on page 100 of Salt Lake Magazine. I had to check it out. After all, my husband Garry LOVES anything “coconut,” so I am always looking for interesting recipes.

Frieda’s has a long history with coconuts. First we imported Coconuts in the husk from Mexico. Those shipments were short-lived, once cocaine was occasionally smuggled inside the coconut husks.

Then, we began importing Coquitos (aka Baby Coconuts) from Chile. About 13 years ago I took a trip to Chile to see the 50-year-old Chilean palm trees where these babies grow. They are amazing! It really does take 50 years before they produce fruit. And the fruits are divine. Resembling malted milk ball candies, Coquitos are crunchy little nuts that taste like rich coconut with almond overtones (no water inside).

Coquito Nuts are perfect crushed and used as a topping or garnish. Actually, there used to be a restaurant on Maui (called Avalon) that featured a dessert called “Carmel Miranda,” which was a plate of tropical fruits with a scoop of ice cream in the middle, garnished with crushed Coquito Nuts. (Carmen Miranda, as you will recall, wore a hat that looked like a platter of fruit.) The chef, Mark Elman, told me that the Coquitos were the centerpiece of this dessert. (Mark has since closed Avalon and started another company — Maui Tacos!)

Well, our latest foray into Coconuts are Whole Peeled Coconuts from Mexico. The inventor, Frank Garcia, came to us about 5 years ago with a problem. He was buying coconuts in Mexico and shaving off the outside husks to create a new product (an organic substitute for peat moss). His problem was that he had all these peeled fresh coconuts (with the very healthy water inside) as a byproduct. He was feeding them to the cows in Mexico! Did we think we could sell them? Well, after more than 12 months perfecting the quality control and food safety process, we finally launched Whole Peeled Coconuts. We also introduced Sliced Fresh Coconuts and Halves (which make great serving dishes).

If you like coconut, there is NOTHING like the taste of these fresh. Unfortunately, our product launch timing was not great. By the time we got supermarkets across the United States to put them in their refrigerated produce departments, the economy started to slow. Most supermarkets decided to reduce the number of “unusual produce items” in their stores.

However, we know that coconuts and fresh coconut water (inside our Whole Peeled and Young Thai coconuts) are an amazing health food. I’m hoping that as the economy comes back, that you can once again find Frieda’s Whole Peeled Coconuts in markets across the United States. If you want to try them, ask your produce manager to order them!

About that Salt Lake magazine article on Coconuts… You can read the story here. It has a great recipe for Coconut Cake. I’m thinking of baking this weekend.