Dare To Show Up

About 18 months ago, a dear friend of mine suggested I read a book entitled Braving the Wilderness by Brené Brown. I really had no idea who Brené Brown was, but I felt an instant connection to her since she narrates her books (I listened to the book on Audible).

Brené Brown, Ph.D., LMSW, is a research professor at the University of Houston. That’s her day job. But her real calling is that she has spent the last two decades studying courage, vulnerability, shame and empathy. Her TED talk – “The Power of Vulnerability” – is one of the top five most-viewed TED talks in the world, with more than 35 million views. That is a lot of views!

She talks about shame and vulnerability – not the typical subjects of speeches and presentations. Mostly because no one likes to talk about that. If you haven’t listened to her, I highly suggest you either watch her TED talk or listen to one of her books. Her Texan accent, her speech is punctuated with swear words (her talks are heavily peppered with the word “bullshit”) and her authenticity are contagious. I learned years ago that to use a swear word properly in a speech can actually connect you with your audience.

But Brené’s use of swear words is more than a connection tool, it is the truth, exemplified. Like when she was asked to speak at a Very Big Business Conference, with the limitations of 1) no swearing and 2) no mention of her faith (her personal values are faith and courage). She talked about her thought process on this request, and finally she decided, “This is bullshit.” She is who she is, and she will not give in to anyone who asks her to NOT be her authentic self.

You can probably tell, I am a bit of a fangirl for Brené, so when I learned that she was speaking in Houston at a small private event, my friend Lisa, who lives in Houston, offered to have me sit at her table for the dinner. I booked my ticket to Houston immediately – I was in!

Let me start by saying that I must have mentioned to Lisa at least five times that I wanted to meet Brené personally. I was so determined that Lisa sent me a screenshot of the seating chart for the event, to show me where we were sitting (table #4) and where Brené would be. I wrote a note to Brené on my personal stationary and carried it with me in my purse.

So, it was no surprise that when we arrived at the pre-event reception, I spotted Brené across the room. I don’t think anyone had really seen her yet. So I quickly pulled out my phone, recruited someone I didn’t know to take our photo and moved toward Brené. 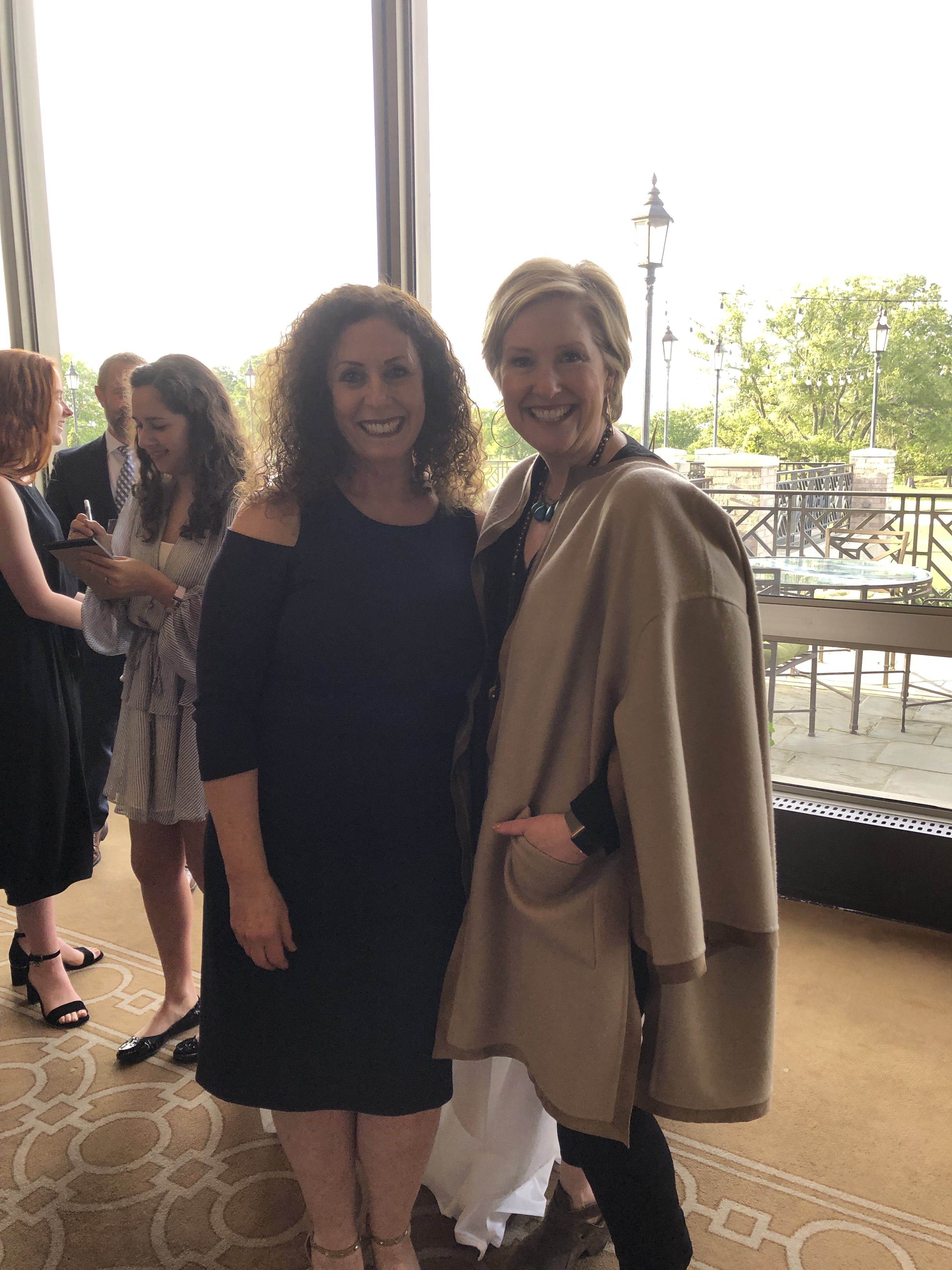 I was immediately struck by how she connects with people. She looks directly into your eyes and genuinely smiles. When it was my turn to say hello to Brené, I passed her my note (to open later) and told her that I flew from California just to see her. I also shared that her latest book, Dare to Lead, was so amazing that several months earlier I purchased 10 copies of it to distribute to every member of my leadership team at work.

After our photo was taken, I looked and there were dozens of other people lined up to talk with her.

After the dinner portion of the event, she got up and spoke to this group of 250 people about the Five Barriers to Courage:  Tough Conversations, Fears & Feelings, Stuck in Setbacks, Problem Solving/Action Bias and Inclusivity, Diversity + Equity. And she ended her talk with the Four Skills Sets Needed: Rumbling with Vulnerability, Living into Our Values, Braving Trust and Learning to Rise. 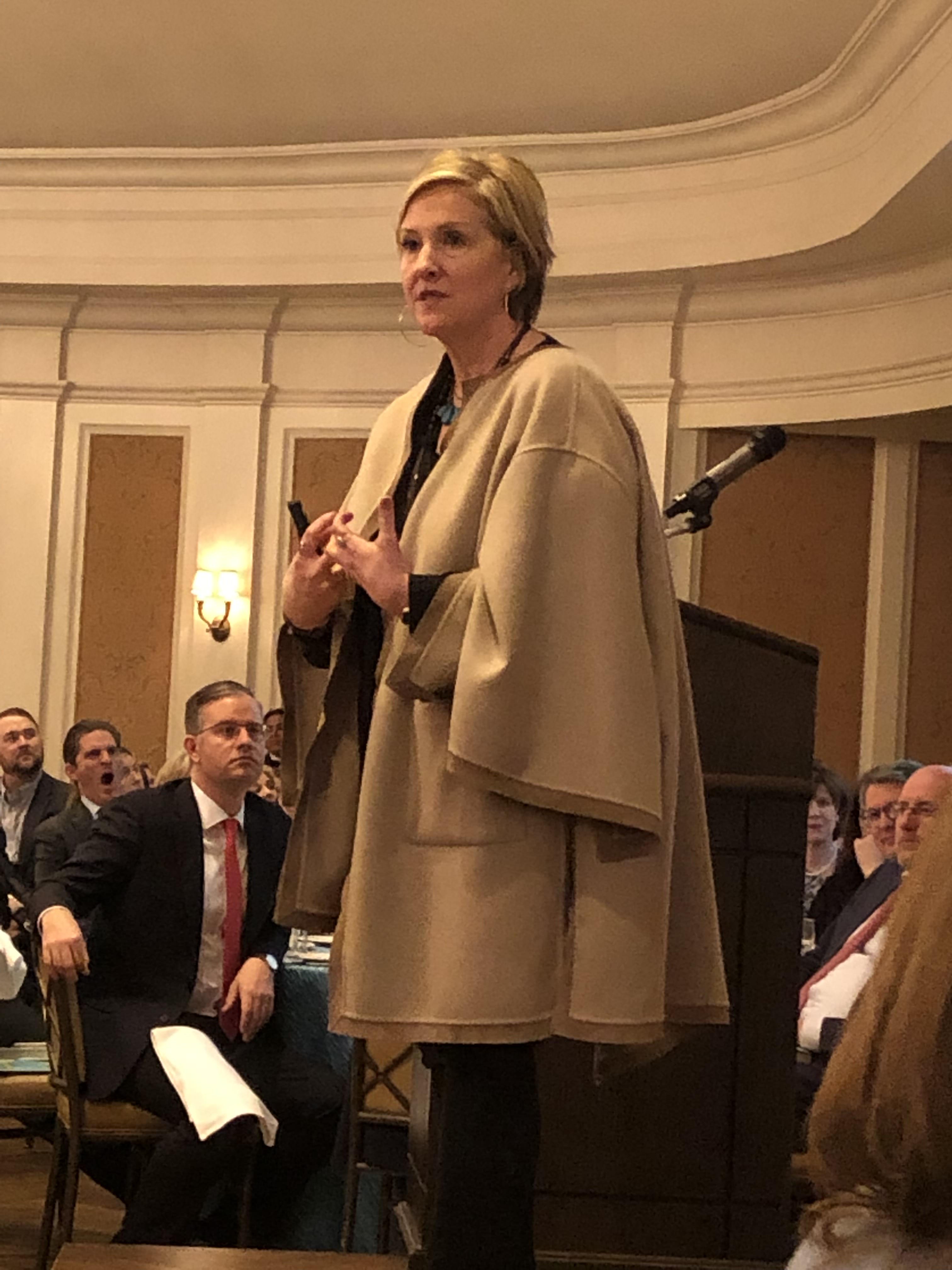 She is such a compelling speaker that even though the dinner ran long and she wasn’t able to start her talk until 9 p.m. – not a single person got up to leave before she finished at 9:45 p.m.

As I rode in the car back to my hotel, two takeaways rolled around in my head.

And second, clear is kind. Unclear is unkind. (I asked myself, how many times do I beat around the bush with people and am not direct with my ask or my opinion?) I am really being unkind by being unclear?

This trip to Houston to meet and hear Dr. Brené Brown was a revelation for me.

The name of the event was: Dare to Show Up. It took a little scheduling and a plane flight, but I’m so glad I did dare to show up. I hope YOU will dare to show up when the opportunity presents itself to you.