Alice Waters is probably one of the most renowned chefs and restaurant owners in the world. She resides in Berkeley, California, and is one of the most delightful, genuine and authentic people on the planet, in my humble opinion.

There appears to be a halo around her sincere, bubbly smile.

I’m not sure when I first met Alice, but I believe it was at an American Institute of Food and Wine event in Santa Monica, California. Mom and I were there on a Sunday afternoon (more than 25 years ago) and chefs were arranged all over the dining room of Michael’s Restaurant, sampling their favorite foods.

I recall exactly what Alice Waters served. Fava beans mashed with olive oil, garlic, lemon juice and salt. Served on baguette. Yum! It was the first time I had eaten fava beans and the experience was amazing. 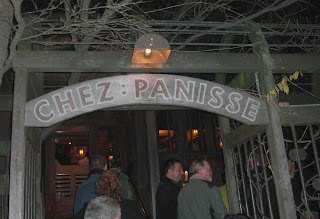 Being somewhat of a foodie, I have always wanted to dine at her famed restaurant, Chez Panisse, but never seemed to make reservations in advance of my trips to the Bay Area. Alice and a few friends opened Chez Panisse in 1971 and I learned that it was named the Best Restaurant in America in 2001 by Gourmet Magazine. Chez Panisse is also known for using only local, seasonal and organic foods and the menu changes with the seasons.

Since I was going to be in San Francisco for the Fancy Food Show, I was determined to mark this item off my bucket list, so I called a few weeks ago and was able to secure reservations in the Chez Panisse Café. I have to admit, I thought it would be disappointing to eat in the café upstairs instead of the regular dining room, but at least I could say I finally dined at Chez Panisse. 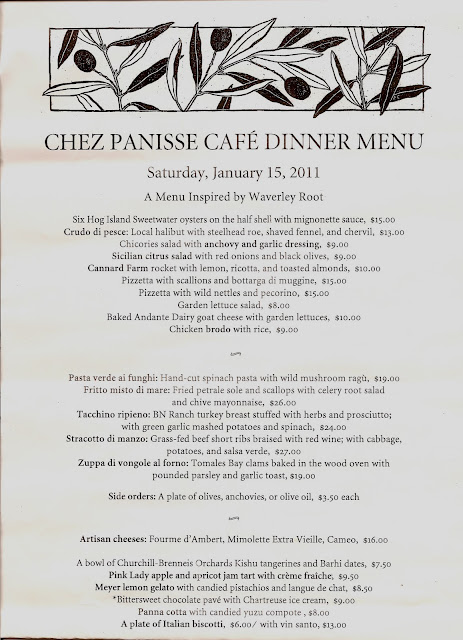 My friend Mary and I were greeted at the door by a charming Maitre D’. The atmosphere and décor was woodsy and warm, with the feeling of a log cabin. Our service was impeccable. (Check out our menu for the evening.)

The Cannard Farm rocket (arugula) salad with lemon, ricotta and roasted almonds was light, flavorful and perfect. I really did savor each bite. The short ribs had amazing flavor and the coffee was hot and lovely. (I often judge a restaurant by their coffee, as I am pretty picky about it.) We both ordered dessert: Mine was the Pink Lady apple and apricot jam tart with crème fraiche, and Mary had panna cotta with candied yuzu compote. Both were delicate, well balanced and absolutely delicious.

I really enjoyed dining in the “Café,” as there is great energy on the top floor and we struck up a conversation with the couple next to us. They have been coming there regularly for 15 years. Every night the menu changes and tonight’s menu was inspired by Waverly Root, an author I have long admired.

As luck would have it, Alice Waters arrived at the restaurant while we were dining, and the Maitre D’ made a special effort to let me know that she was there and promised to make sure I was able to say hello. At the end of our fabulous dinner, as we headed toward the stairs, I found Alice. She was charming and genuine as always and I waited while she autographed a cookbook for a guest. Alice took her time and added some illustrations to her signature — a truly personal touch.

If you are ever in the Bay Area, you MUST go to Chez Panisse. It is no wonder it is one of the best places to dine in America.