It seems like every day when I open up The Wall Street Journal or listen to the news on my drive to work, I hear something about Federal Reserve Bank Chairman Jerome Powell and interest rates. I always take a personal interest in it because I was a director of the Los Angeles branch of the 12th District of the Federal Reserve Bank from 2005 to 2007.

I have written before about how I became a director. It was an amazing time of my life and meeting then-Chairman Alan Greenspan at a cocktail party at the Federal Reserve Building in Washington, D.C., is definitely near the top of my incredible experiences list. Greenspan made the words “irrational exuberance” famous.

During that visit, I sat in the office of Ben Bernanke, then a member of the Fed’s board of governors, and asked him about a book I saw on his bookshelf, “The Federal Reserve Bank for Dummies.”

It was during that time that Janet Yellen, Ph.D., was selected as president of the 12th District. I saw her twice during periodic board meetings held in San Francisco. Dr. Yellen was appointed by President Barack Obama in early 2014 to succeed Bernanke as chairman of the Federal Reserve Bank, admittedly one of the most powerful and influential positions around.

So, I was very excited to learn that she would be in my area this week, as a speaker at City National Bank’s 2019 Economic & Investment Forum. Of course I wanted to hear all of the speakers at the forum, but I really wanted a chance to say hello in person to Dr. Yellen.

After securing a spot at the event, I had to decide how I was going to meet up with her to have a personal conversation. If you know me at all, you know I am determined. And I was definitely determined to be up close and personal with Janet Yellen.

The first thing I did was to arrive early for the event. I heard they were having more than 500 people in attendance, so I wanted to get a good seat. After getting my name tag, I immediately went inside the conference ballroom. At first it appeared that all the front-row seats had reserved signs on them. But because I went all the way to the front of the room, I was able to locate a partial row that somehow had no reserved signs. I plopped down my purse and scarf to save three seats for my colleagues and me. Right in the front row.

I then went on the hunt for the chairman of City National Bank, who would be introducing Janet Yellen. A longtime banker friend pointed him out to me and I made my way to him. I had not seen Russell Goldsmith for at least eight years since we ran into each other on a plane, but I pretended we were old friends and he played right along. I told him how good it was to see him, reminded him that he and I served on the Federal Reserve Board together and that I had actually corresponded via email with Dr. Yellen a few years ago and wanted to be sure and say hello to her. 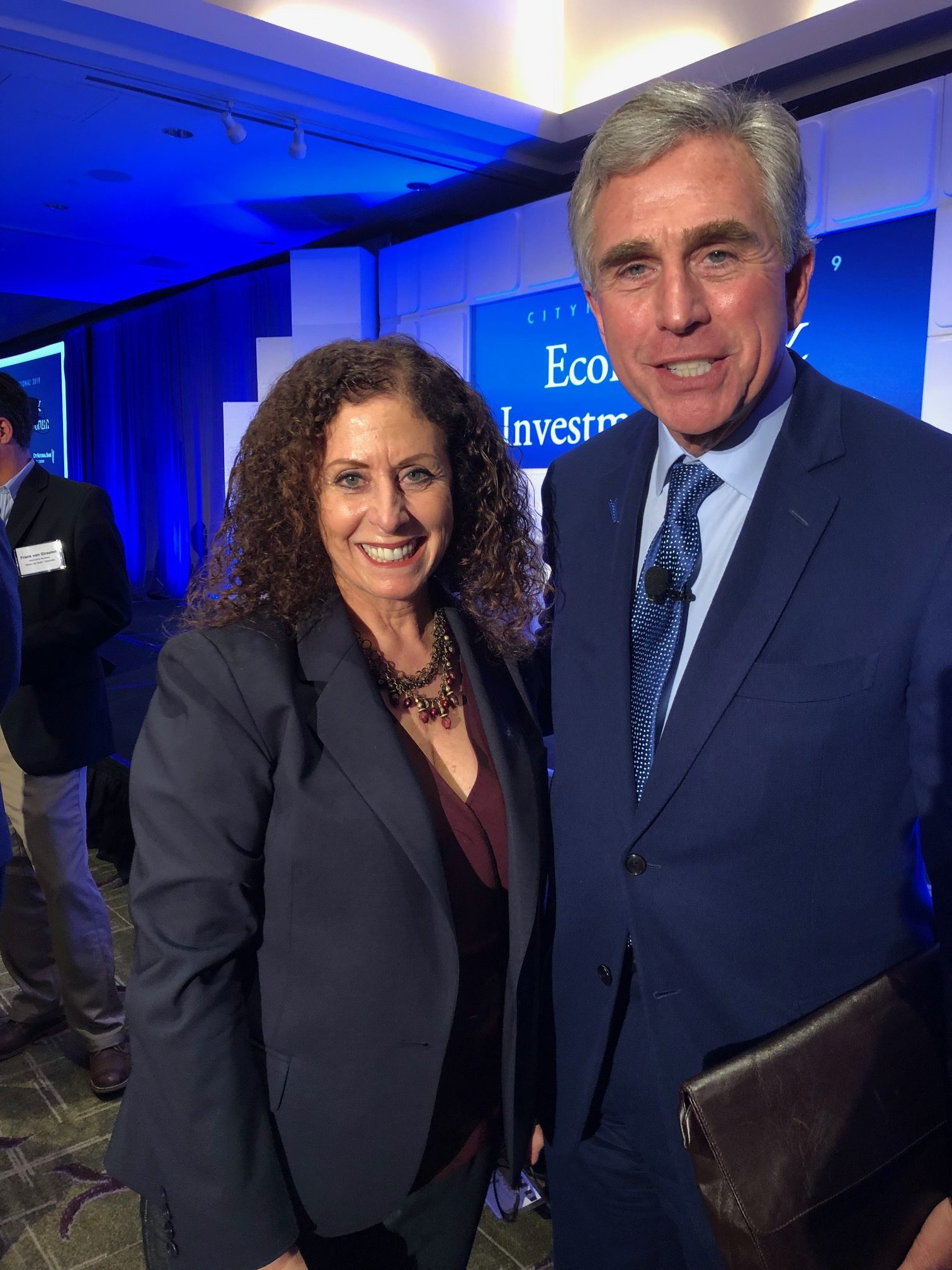 Well, Russell was more than helpful and he told me how I could meet her. He told me that as soon as she exited the stage, to jump up and say hello. He pointed to the area directly in front of where I was sitting. Bingo!

So I listened and waited for two hours. I heard City National Bank’s experts in housing, internet research and media research talk about their favorite stocks and recommendations. I listened while Russell masterfully asked Dr. Yellen what she thought about the growing deficit, unemployment, China and the apparent new normal for interest rates. And finally, the event was coming to a close. As Janet smiled, waved and walked off the stage, I jumped up and almost raced up to see her. 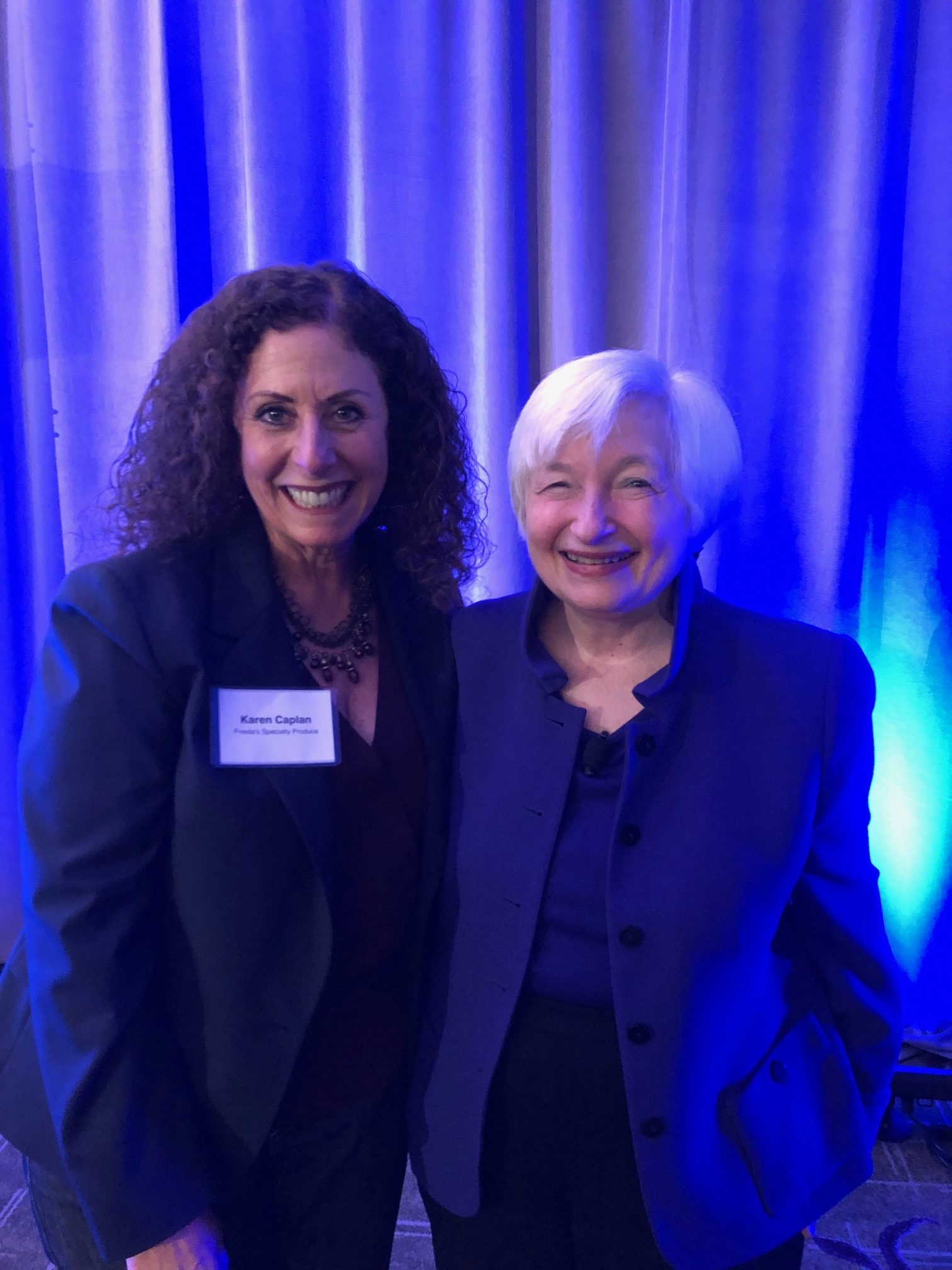 It was like we were old friends. She remembered me and my family produce business. I asked about her husband and her son. She told me they were now living in Washington, D.C., and gave me her email address. After we hugged and took a photo together, I turned around to see dozens of people from the audience lined up to meet her. I smiled. She had to keep walking to catch her flight.

Sometimes it takes determination, planning and a laser focus to get what you want. Have you ever felt that way? You really, really, REALLY want something. And even if it seems impossible, you know deep inside that the only way you will get it is if you use focused determination.

Well, I got to see Janet Yellen. I wonder what else I can accomplish with that same determination. And you?