Getting to Know Janet Yellen

The chairs of the Federal Reserve System have always been men. Now, the 15th leader of our national bank is Janet Yellen, the first woman to chair it.

With this appointment, Janet is opening doors to women in economics and finance everywhere. In a way, her accomplishment reminds me of how my mother, Frieda, opened doors for women in the produce business, when she founded our company in 1962, as the first woman to own a produce business in the U.S.

Seven years ago when I was a director of the Los Angeles branch of the Federal Reserve Bank of San Francisco, I had the good fortune to get to know Janet when she became president of the 12th District, which covers much of the western U.S. We had several dinners together during our overlapping terms of office. The conversations we had weren’t all about work.

We also talked about our respective families. I asked after her husband, Nobel Prize winner George Akerlof, and their son, Robert, who is an economics professor in England. And she peppered me with questions about my daughters, our business, and the ins-and-outs of the produce industry.

So, when I saw her picture on this week’s cover of “TIME” magazine, I got a big smile on my face. 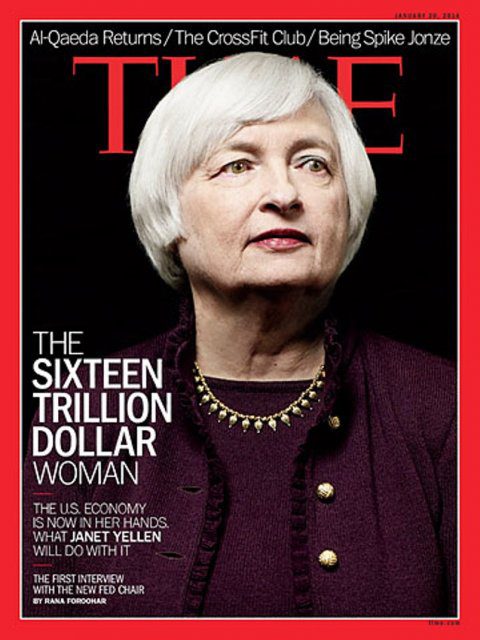 I am privileged to know yet another trailblazer.

So, when I read about the Senate’s confirmation hearing on Janet’s position, I sent a congratulatory email to her assistant, figuring that she would be too busy to pay attention to my personal note. I never thought I would hear back from her.

But I did. Janet took the time to send me a personal email and, as always, ask about my family. I’m sure she was taking the Christmas holiday period to take many deep breaths and relax before traveling back to Washington, D.C.

It is Janet’s connection to people that makes her the perfect person for this job. A woman of great strength, she also has a deep understanding of the challenges of our economy. Plus, Janet knows that statistics aren’t everything. She recognizes how the economy affects people in the real world in a very real way, and that our economy is made up of individuals like you and me. Even the “TIME” magazine article made note of that. (You will need a subscription to read the article online, or you can pick up a copy from a newsstand now.)

Janet is also one to welcome challenges and to challenge the status quo in pursuit of the truth. If you watched the Senate confirmation hearing on C-SPAN, you would have seen the twinkle in Janet’s eye when Senators asked her difficult questions. She clearly loved it.

During my next trip to Washington, D.C., I hope Janet and I will, once again, have dinner together. I can hardly wait to hear about her new adventures as the Sixteen Trillion Dollar Woman!