How to make your husband happy

My husband Garry and I do not often get a few days alone. So last week, on our way to my daughter Alex’s college graduation in Virginia, we stopped in New York City for three days.

I decided to try a different strategy on this vacation – I let him plan everything. We went to the restaurants he wanted, the landmarks he wanted to see and I did not drag him into any grocery stores. (OK, we did go inside a small grocery called William Morris, but only because they had air conditioning and it was VERY warm.)

So, here are Garry’s picks for your next vacation in New York City: 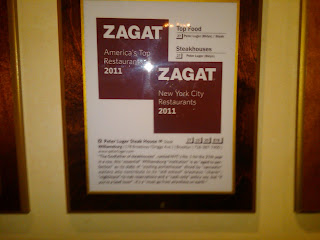 When you cross the Brooklyn Bridge, make a sharp right and you will end up at the top-rated steakhouse in New York for the last 28 years. Since Garry is from Texas, you know that red meat, aka steak, is considered its own food group. And yes, our dinner was a small green salad and a huge steak and French fries. (Did you know that French fries are technically a vegetable?)

Even though I’m not a big red meat eater, the steak was fantastic. (Note: they only take cash — no credit cards.) Thank goodness Garry made reservations three months in advance, because it was jammed. 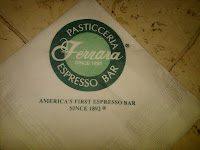 How do you follow a steak dinner of that magnitude? Well, of course, you go back into NYC to Little Italy for the best place for dessert. Because it was raining, thankfully, there was not a line out the door. But the 30-foot long glass display case of desserts was sumptuous. Every kind of dessert known to mankind was on display. Garry had some very tasty pistachio ice cream. I was stuffed from dinner, so I had coffee and biscotti. You can actually order their famous cheesecake, and many more of their desserts online at www.ferraracafe.com 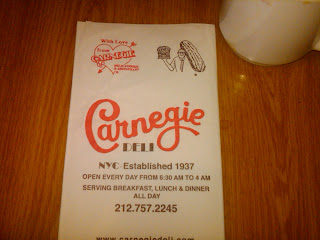 The next morning we walked about four blocks to Carnegie Deli for breakfast. This place has a reputation for the best pastrami in New York City, and possibly the country. The walls at Carnegie are covered with autographed photos of many politicians and movie stars and the servers have been there for decades. As we sipped our coffee and enjoyed our breakfast, I watched this guy walk around and greet some of the guests by name. I figured he must be the owner – so I jumped up and introduced myself. Yes, it was Sandy Levine. His title is “MBD.” When I asked him what that stood for, he was shocked I didn’t know. He finally told me: “Married the Bosses Daughter.” We both had a nice laugh. We told Sandy that we had breakfast at his deli in Las Vegas (at the Mirage Hotel). He said that it is so wildly successful that it forced the closure of the hotel’s coffee shop and another deli in town!

Oh, and here is a photo of the pastrami sandwich the couple sitting next to us ordered. It is at least 6 inches tall. 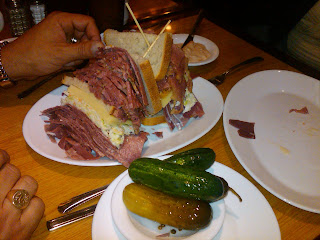 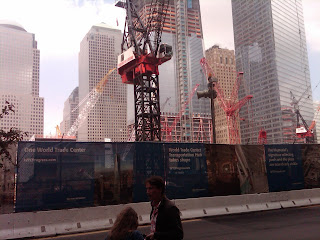 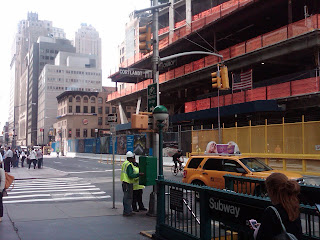 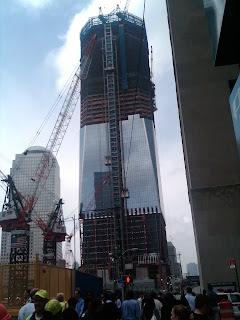 I think no visit to New York City is complete without paying your respects at Ground Zero. Garry and I took a taxi there and walked around. The area is amazingly clean and you can see the construction of the new building. I visited New York City in December 2001, so the change is remarkable.

Adjacent to the site of the former World Trade Center is a discount store that is world renowned. We didn’t buy anything, but Garry and I had fun looking at the busloads of tourists who arrive there almost hourly, looking for a bargain. Clothes, housewares, everything. Yes, my husband likes to shop — it was his idea to go there!

When I was in New York City last November, Garry heard me rave about Mario Batali’s newest food venture. So, he wanted to see Eataly New York for himself. We walked around the venue for about an hour as we waited for a table at the pizza and pasta area. After we stuffed ourselves with Agnolotti pasta and a Fru Fru pizza, we went to get an espresso. While sitting at the espresso bar, we struck up a conversation with the lady sitting across the table. Turns out she was a journalist working for the New York Daily News — and used to live in Seal Beach, California (where we live)! New York is a small world!

After we saw Jersey Boys on Thursday evening (while in New York, you really must see at least one musical), we decided a “midnight snack” was in order. Junior’s is located across the street from the Marriott Marquis Hotel, where we stayed. Although we were not that hungry, we split a pastrami sandwich (very yummy) and then had a brownie-ice cream sundae for dessert.

It will probably not come as a complete surprise that I didn’t eat much over the next few days.

But I will say that my husband was very happy. He said it was the first time we went on a vacation in the last four years and did everything he wanted. And he said I seemed to enjoy myself, too!

So, there you have it – how to make your husband happy!