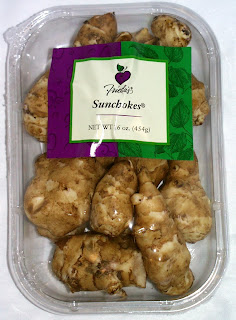 In the 1960s, Frieda was presented with an ugly new vegetable to sell, called the Jerusalem Artichoke. The tuber of a sunflower-like plant, this veggie had a nutty flavor and a texture reminiscent of an artichoke when cooked.

She began selling them loose in 10-pound boxes to Jewel Food Stores in Chicago, her biggest customer at that time. One day the Jewel Foods buyer called her and said, “Frieda, we put the Jerusalem Artichokes out on the shelves, but they are getting soft and going bad, so we are going to discontinue them.”

My mom was horrified because she knew this was a major crop for the small family grower, Suren and Marion Tejirian, of Reedley, Calif. A setback like this could put them out of business.

So, Frieda put on her “thinking cap,” and decided the Jerusalem Artichoke needed a catchy new name. This knobby root vegetable wasn’t from Jerusalem, nor was it related to an artichoke. The name Sunchoke® was born, and we trademarked it in 1980.

Another retail customer suggested that Frieda package the Sunchokes® to keep them fresh and differentiate them from ginger roots, because they looked very similar. She then started packing the tubers in 1-pound bags, and also included recipe information right on the package. This would take care of all the calls she was getting from people asking her what to do with them.

After we started packaging the Sunchokes® this way, sales really took off. I remember mom sharing in an industry speech that sales increased 600 percent with that single packaging innovation!

Then something really interesting started to happen. Along with the recipe information on the package, Frieda had wisely included an invitation for shoppers to write to us with any comments or questions. We started receiving anecdotal information from consumers. In particular, consumers who had diabetes began writing to us to share that their holistic treatments included consuming Jerusalem Artichokes (Sunchokes®) to reduce their need for insulin. More information about this here.

Sales of Sunchokes® continued to increase. But there was one small problem. When you eat Sunchokes®, you get flatulence (pardon me).

Actually, we even got a hand-written postcard from Julia Child many years ago, asking: “Regarding Jerusalem Artichokes, is there anything you can do about the flatulence?” Much has been written about Sunchokes® and their after effects. You can read a rather comical tirade here: Jumpin’ Jack Jerusalem Artichokes…It’s a Gas Gas Gas!

Despite this inconvenient side effect, Sunchokes® are an extremely healthy food. They are packed with fiber, folate and magnesium and loads of other vitamins. In addition, Sunchokes® (as well as Jicama) contain inulin, a natural starch-like fiber that does not increase blood sugar or raise triglycerides significantly. Inulin also increases calcium absorption and is considered a form of soluble fiber. (Inulin might also be to blame for the gassy effects.)

The Sunchoke® season has just begun in California. Washington-grown tubers will start in another week or two. Interestingly, at the beginning of the season, the calorie count is lower — about 30 calories per serving. As Sunchokes® are stored, the caloric content increases to about 75 calories per serving. (This also happens with many winter root vegetables.) Regardless, Sunchokes® are still very low in calories.

But the best thing about Sunchokes® is the flavor. When raw, they are nutty like a combination of artichoke hearts and waterchestnuts, and when cooked, they add an indescribable nutty flavor to dishes. (Try them with a béchamel sauce.)

So, if you’re looking for a new vegetable to try this winter, I recommend Sunchokes®. They should be available in supermarkets across the USA through April or May.

For those of you who have eaten Sunchokes®, how do you like to prepare them? Please share your tips in the comments section.