About 14 or 15 years ago we got some very interesting visitors: Two ladies who managed the Citrus Variety Collection at the University of California at Riverside — Tracy and Tootsie. (Tootsie has since retired, but I had the great pleasure of touring the Citrus Collection with Tracy earlier this year . . .following her in her Volkswagen Bug around the citrus groves.)

Tootsie and Tracy brought us dozens of samples of all kinds of new citrus varieties that were either growing or being developed there. As it turns out, this very Citrus Collection is considered the world’s preeminent repository of citrus rootstock and varieties and due to my mother’s long association with the University in Riverside, we got to preview what was up and coming.

One of the more fascinating citrus items they showcased were Finger Limes, which we have lovingly called “Lime Caviar” because of the miniature pearls of lime that ooze from these finger-shaped fruits when you break open the skin. 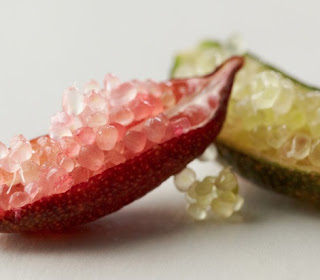 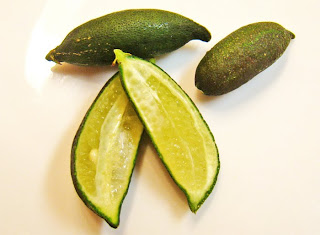 I admit that they are super tart. In fact, I learned to roll them around in my mouth for a few seconds (they maintain their round shape), before crunching down on them.

Six years ago, as I was walking the exhibit halls of Fruit Logistica (an international fresh produce trade show) in Berlin, Germany, I came across a grower of Australian Finger Limes. We tried and tried to get a permit to bring them into the United States, but to no avail.

Fortunately, we began working with several growers in Southern California who have planted a few Finger Lime trees and they are now being harvested.

Finger Lime trees are quite interesting. They are small bush-like trees with many thorns. I swear the thorns are there to protect those darling little limes. During a tour of a Finger Lime grove in Ojai, California, last year, the grower let me know that they have bears (yes, BIG BEARS) in their citrus grove, so I was a bit nervous after I saw a giant pawprint in the ground.

But what I learned about Finger Limes is that in order to harvest them – you shake the trees! Tarps are placed on the ground underneath the tree before the shaking begins, and because of the thorns, that is the best and only practical way to harvest them.

I do have some bad news about the Finger Limes. They are SUPER expensive. There are only a few growers and with the high cost of land, the expensive root stock and the small yield from each tree, they cost a pretty penny.

You may (and that is a big MAY) find them on the menu of a very upscale, chic restaurant. (Although I am not a big oyster eater – I’ve heard that chefs love to pair them with oysters as a garnish or topping.) Or you may find them in an upscale retail store or at a Farmer’s Market if you live in California.

They are probably packed in 4-ounce packages filled with dozens of tiny Finger Limes. Don’t be surprised if they are priced at close to $20 a package — which probably equates to 50 cents a lime.

My recommendation is to buy a package and share them with friends. Use this “Lime Caviar” instead of fish caviar on crackers with cream cheese. Or drop a few pearls of Finger Lime into a Martini at your next dinner party – and have a real conversation starter when your guests ask, “What’s that floating in my drink?”

And if you want to find out more about the Citrus Variety Collection at U.C. Riverside, check out this link to the 60 Minutes Show that aired on Sunday, November 27. You can also find out where the most top secret Swiss flavor developers in the world go to get their citrus flavors! (Click here to watch “The Flavorists” on 60 Minutes. It’s the second story — about 16:30 minutes in.)