I don’t usually get star-struck. I have no interest in getting autographs of famous people or visiting the homes of the stars in Hollywood.

But about six weeks ago, my daughter Alex and I attended an NCAA Sweet 16 Championship game at Staples Center in Los Angeles. Afterwards, we decided to grab dinner at one of our favorite restaurants, Border Grill, which is owned and operated by longtime business partners, Susan Feniger and Mary Sue Milliken. They are big users of fresh produce and offer flavorful and fresh authentic Mexican cuisine.

So there we were in an almost empty restaurant (typical of downtown L.A. at 5 p.m. on a Saturday evening), munching on chips and salsa, when a familiar-looking man walked in.

I would recognize Mark Bittman anywhere.

Mark currently writes for The New York Times, but I first learned about him when I bought one of his books, “How to Cook Everything,” more than 10 years ago.

His writing covers agriculture, health, the environment, and, of course, cooking and eating. He is a regular on the “Today” show and has hosted four TV series. But when he went mostly vegan a few years ago and wrote “VB6: Eat Vegan Before 6:00,” he really got my attention. (As you may recall, I went vegan for about a year in 2012.)

The premise of VB6 was that Mark loves food, but he needed to make some dietary changes due to health concerns. That is when he ingeniously realized he could be a vegan before 6 p.m. each day, then eat pretty much what he wanted in the evening.

So, when I saw him walk into the restaurant and sit at a table by himself, I took a deep breath, put on my lipstick, and went over to say hello.

We chatted for a bit about my mom, Frieda, about why he decided to go vegan, and which restaurant I should dine in during my next visit to New York City to celebrate my youngest daughter, Sophia, graduating from college. I also learned that he is temporarily living in Berkeley, Calif., thus his recent story on Monterey Market. I think he was impressed that I had seen the article.

After I went back to my table, I had my regrets. Shouldn’t I have gotten a picture with Mark? So I recruited Alex to return with me about 30 minutes later to chat some more and get his permission for a photo together. 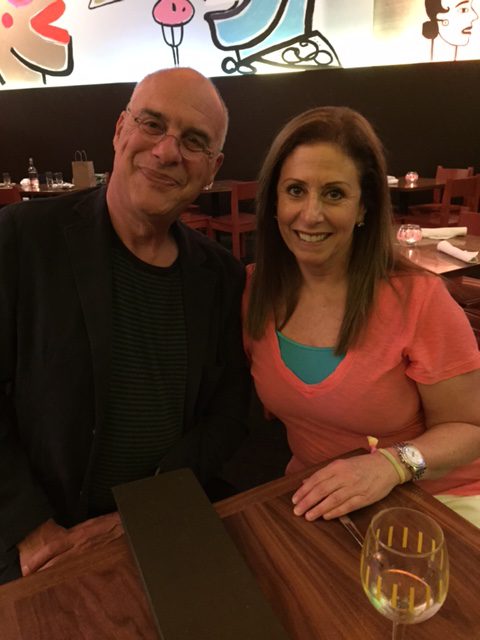 What I loved about talking with Mark is that for someone who is such an authority on EVERYTHING, and so well connected, he was, well, human—a little funny and very humble. He was not annoyed that I interrupted his dinner twice.

I have met another pretty famous person. His name is Shaquille O’Neal and I met him at O’Hare airport in Chicago. As it turns out, a friend of mine, Michael Downing, is a business partner with Shaq in a company called Tout, which has been around for more than four years, before Vine videos became so popular. Tout is a next generation video platform for media companies to share content.

So, when I saw this HUGE man walk past me in the airport, I took a chance and approached him, asking if he knew Michael. I think Shaq was taken aback that I was not asking him for his autograph or photo.

After I said hello, I walked away, and then realized I should have asked him for help. You see, and you may not know this, but Shaq is a bit of a computer geek. So, I walked back to him and asked him if he could show me how to use Tout. I had downloaded the app, but did not know how to use it!

And there I was in the middle of O’Hare airport with this giant man showing me how to use an app on my phone.

So my lesson learned is that most of those famous people are human like the rest of us. And if you treat them like an old friend, and have a sincere conversation, they might just let you get your picture with them.