My morning with Howard Schultz, Founder of Starbucks

Last week I was fortunate to spend the morning with Howard Schultz. He just published a book, Onward: How Starbucks Fought for Its Life without Losing Its Soul, and in honor of his company’s 40th anniversary, he is on a speaking tour.

Although I am only a moderate fan of Starbucks coffee (sometimes it’s just too acidic for me), I am a huge admirer of the company and its culture. I bought stock in the company a long time ago (wish I had held on to it!) and I have found that their focus on the consumer and making your local Starbucks store the “third place” (after home and work) fascinating. 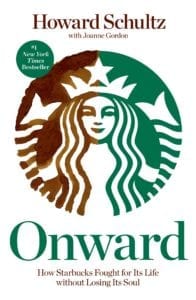 The gathering was intimate and Howard answered questions from Sharon Waxman, founder and editor in chief of TheWrap.com. It was obvious they knew each other well, so the questions were honest and penetrating.

I was so inspired by what he had to say. It wasn’t rocket science. But it was honest. And he was transparent.

He said when he “took the company back over” in 2008, the first thing he did was publicly admit they had made mistakes. They had grown too fast with the wrong priorities. He took personal accountability and was willing to be vulnerable about it. He said they were measuring the wrong things at the company. How many of us in business measure “activities” vs. “results?”

He said his number one job, as company president and CEO, was to rekindle the company values.

Part of the way he did this was to hold a company meeting. To put that in perspective, he gathered all 11,000 store managers at a single multi-day meeting in New Orleans and asked them to do three things:

He caught a lot of flack for flying in all 11,000 managers to a single location. It cost them over $35 million (yes, million) to hold that meeting. But he told us that he felt he couldn’t afford NOT to.

And, the proof of his wisdom is evident. Starbucks stock, after its dramatic free fall, is back up to record levels. Store sales are growing and customer satisfaction is at an all-time high.

Today, Starbucks speaks to consumers like they never have before. Whether in the stores, or on Facebook, Twitter or Foursquare, Starbucks has become the No. 1 brand on all three Social Media sites. They invite their customers to dialogue with them.

But Starbucks goes one step further… They ask EVERYONE for their ideas on how to make Starbucks better: www.mystarbucksideas.com. And better yet, they implement many of these customer ideas. (Note: Many internal Starbucks employees, i.e, former employees, were very skeptical when the company began asking for such raw suggestions.)

But, of all the things Howard said that morning, one thing sticks with me more than anything else.

He said, with a very emotional look in his eyes, that beside his family, he LOVES Starbucks (the company). He said that it was the most important thing in his life, because of what the company stands for. He made dramatic changes to his life and the life of the corporation because of that love.

When I got back to the office, I opened up his book, just to take a quick glance to see if I wanted to read it. The first part of the book is entitled, “Love.” And the pages I have read so far truly speak to that love.

So, for all of you entrepreneurs reading this: How do you feel about YOUR enterprise? Are you being a bystander? Do you LOVE what you do? How do you show that love?

After hearing Howard, this is what I did: I scheduled a week when I could fly all of my remote employees into Southern California so we could all be together. (Some of our staff works out of our office, but a good number live elsewhere.)

I also walked around my office and warehouse and said hello, by name, to everyone. Sometimes I find myself isolated in my office. There is no shortage of emails to respond to or work to do.

Howard Schultz inspired me to remember that my Number One job is to BE the culture of my company! If I show sincere appreciation for everyone on my Frieda’s team, I know that they will be happy and we will do well.

I hope you are inspired to do the same thing.

BTW – During the Q&A, when an audience member asked Howard why they didn’t service Starbucks coffee at this event (they served Peet’s coffee!), Howard didn’t miss a beat. He said, “When I saw what they were serving, I almost turned around and left.”