My surprise in Puerto Rico

Last week, my husband Garry and I took a 5 day mini-vacation in San Juan, Puerto Rico. If you haven’t been there, I highly recommend it, as it is a short flight from Miami. JetBlue Airways recently built their own terminal at the San Juan airport, as it has obviously become a high traffic destination.

In preparation for our trip, I asked a produce industry friend who lives in the U.S. Virgin Islands for some recommendations of places to visit. She emailed me a great list of farmers markets. So when Garry and I woke up in San Juan on Saturday morning, we decided to head off to Old San Juan for a farmers market held at the San Juan Museum.

Because Puerto Rico is a U.S. Territory, they use U.S. currency. That made it so easy to travel there – no need to “calculate the money” in your head. And, in the big cities – San Juan and Ponce – it’s common for most people to speak both English and Spanish, so it’s easy to communicate.

The architecture of Old San Juan is quite colorful and beautiful. It reminded me of photos I have seen of towns in the Bahamas, France and Italy.

Turns out the theme of the market that day was “Festival of the Banana.” Everything was organic and most of the vendors were selling vegan food!  I was in heaven!

My Spanish is a little rusty, but it was interesting to hear the various speakers get up and describe the different bananas and banana products.

In the corner of the market was a colorful pop-up tent with a banner, “Terra Madre” (translated:  Mother Earth). There was a gentleman giving 10 minute massages and a women at a nearby table taking donations.  Or so I thought… 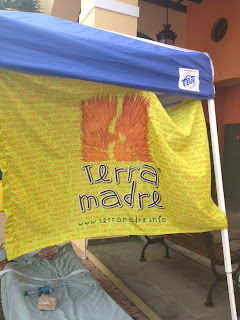 Turns out, the women taking the money was Dr. Elizama Montalvo, a U.S.-trained physician who relocated back to Puerto Rico four years ago with her husband, Bartus.  Bartus was giving the massages – he is trained in acupuncture and Shiatsu massage. They were offering massages for small donations to Slow Food.

I had a fabulous discussion with Elizama about her training at Montefiore Medical Center in the Bronx, New York, at the Department of Social Medicine. After living in New York for so many years, she and her husband moved back to her homeland, Puerto Rico.

Both she and Bartus are vegan, and she told me that Dr. T. Colin Campbell, the author of The China Study, was in Puerto Rico last week leading a seminar on a whole foods plant-based diet. As I have mentioned before, Campbell’s book is an easy read and the authoritative work on how diet can improve your health. All I could think at that moment is “there are no such things as coincidences!” How did this woman and I have so much in common?

On our last day in Puerto Rico, Garry surprised me. He opened his suitcase and pulled out three “California” t-shirts. He told me that he always buys t-shirts from the States and takes them on foreign trips to give as thank you gifts to people he meets on his travels.

So, as we were leaving our hotel – The La Concha Resort in San Juan – I took one of the t-shirts and presented it to Felix, the doorman who had helped us many times during our visit. When we handed him the shirt,  I could see tears come to his eyes. He said one of his lifelong dreams was to visit California! You can see from the big smile on his face, this t-shirt made him very happy.

Puerto Rico is an island of many surprises: Wonderful food, mild weather, interesting cities. But most of all, friendly people!