Night at the Newseum 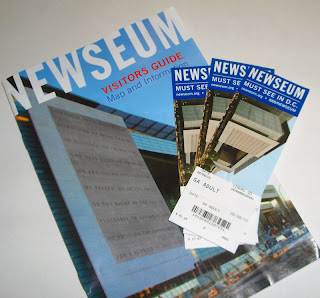 A couple weeks ago, my younger daughter, Sophia and I traveled to Washington, D.C., to visit my eldest daughter, Alex. Alex is a third-year student at George Mason University. (I have found it is a really nice diversion to go visit and get her out of the dredge of school.)

The challenge with having two daughters for a weekend away is: What to do? As usual, my first reminder to them is, “Shopping is not a sport! It is NOT something ‘to do in our spare time’ instead of going sightseeing. We are not, I repeat, NOT going shopping.”

When I was last in Washington, D.C., with an afternoon to spare, I took the advice of a local photographer and went to the Newseum. The Newseum is on Pennsylvania Avenue between The Capitol and The White House, and is billed as the city’s most interactive museum.

With Alex and Sophia in tow, we took the Metro for an afternoon adventure. I admit that I was a bit nervous, as my two girls are not avid museum-goers. (The first time I took Alex to the Louvre in Paris, we walked into the magnificent entrance filled with sculptures and she exclaimed, “Mom – all these statues look the same – like naked people looking at the sky. Can’t we go do something fun?”)

As we approached the Newseum’s glass entrance, I could see they were already hooked. Front pages of newspapers from every state in the country and many countries around the world were posted in cases surrounding the entrance of the museum. The girls walked slowly together, checking out the many newspaper headlines, curious about what was happening in each state and everywhere else in the world. The Olympics in Vancouver and the earthquake in Chile were front and center.

Once inside, we started on the 6th Level and experienced “Manhunt: Chasing (Abraham) Lincoln’s Killer.” Memorabilia from Lincoln collectors are displayed around the medium-sized room. Reading the story of President Lincoln’s last few hours alive really made you feel like you were there.

On Level 4, in the 9/11 gallery, we watched a video featuring journalists who covered (and survived) the terrorist attacks on the World Trade Center. Directly outside the gallery is the actual radio tower that once sat at the top of the World Trade Center, scarred by crashing to the ground. Everyone observed the entire exhibit in deafening silence.

We saw Tim Russert’s office (the now-deceased host of “Meet the Press”). We saw the door from the Watergate break-in, complete with the doorknob taped open! We saw eight sections of the Berlin Wall, and we saw newspapers on Dewey being declared President…and Al Gore conceding the Presidency. (And, of course, the “Saturday Night Live” version of that famous 2004 election).

Eventually, we gathered our coats to leave and brave the 36-degree weather. Alex said, “I need to tell my Issues in Public Relations professor that this would be a great place for a field trip. This was the most amazing museum I’ve ever been to.” Sophia was taking photos of everything so she could share with her World History teacher back home.

My faith was restored in my daughters: What’s happening in the world DOES matter. It is relevant. And I hope that if you have a chance to go to Washington, D.C., you make time to visit the Newseum. Coming soon – an exhibit on Elvis Presley!