Our visit to Chicago

After our evening in Cleveland, our next stop on our cross-country road trip was Chicago. When I think of Chicago, I think of amazing food choices. (A few years ago I was able to dine at Charlie Trotter’s and was greeted by Charlie himself.) So, when my friend Andy saw my Facebook post that we were stopping in Chicago, he asked if he could take us to dinner. Who could say no to dinner in Chicago?

Andy asked me to meet him at the hip, cool Japonais Restaurant. The only hint he gave me was that there were two chefs — one is Japanese and one is French – and they have combined their two cuisines and it has been amazingly successful.

Japonais is located in the former Montgomery Ward headquarters in downtown Chicago (Montgomery Ward used to be a big department store chain.). As in many large cities, the large, empty warehouses are being redeveloped into artists’ lofts, studio apartments, nightclubs and in this case, a two-story bar and restaurant.

When we arrived, Alex and I went downstairs to enjoy the view of the river and had a drink. I was happy to see that many of their drinks featured fresh produce! Alex had the Peach-Sake Sangria which featured fresh peach chunks. Andy had the Starfruit Martini featuring fresh slices of Starfruit as the garnish.

When it was time for dinner, I let Andy order for me. Sometimes it’s more fun to be surprised with the dinner choices. Other times, I ask the chef what is good that evening. I encourage you to try that sometime.

So, Andy asked our server to bring “The Rock.”

You can see from the pictures that the “rock” is a small stone. This rock is heated to over 1,000 degrees (yes, one thousand degrees hot!) and arranged on a bed of salt, so the hot rock does not crack the plate. It is served with a plate of thinly sliced beef, which is marinated in some secret sauce.

To enjoy this unique dish, you take a piece of the meat with your chopsticks and place it on the hot rock to cook, turning it once. Since the meat is sliced so thinly and the rock is so hot, it takes less than 20 seconds to cook it on both sides!

What a great conversation piece — and it was delicious!

That evening, we spent the night with my good friends Gillian and Jack. They live right on Lake Michigan. So, when we awoke the next morning, Gillian took us out for a walk on the beach. This small beach is like an oasis, adjacent to the big city. 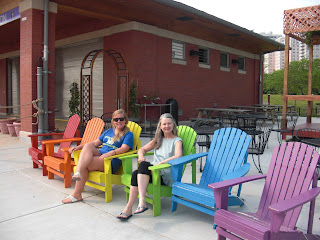 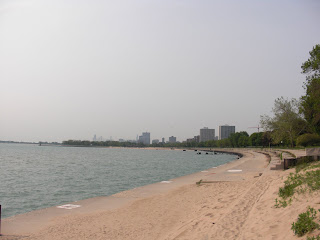 Before we left the city, we had the good fortune to visit one of our company’s clients, Testa Produce.  A family-owned business in its fourth generation (celebrating its 100th anniversary!), Testa’s owner, Peter Testa gave us a tour of their new facility that just opened six weeks earlier. 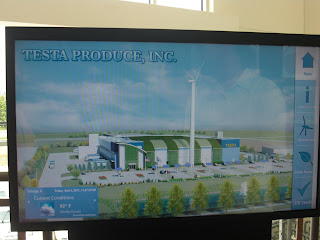 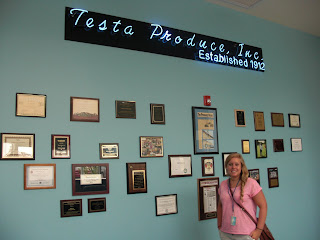 What’s so special about Testa Produce? Sustainability, competitive advantage, competing with HUGE companies and personal passion. That pretty much explains Peter Testa’s philosophy. It was time to relocate his 100-year old company. So, he decided to create a facility that would be unique, cutting edge and efficient, and in the process it gave himself and his company an unbelievable competitive advantage.

Testa Produce is one of the leading foodservice distributors in the Midwest and is based in Chicago, but services the surrounding states. You can read more about them here.

At the new facility, Peter included every possible sustainable and green-oriented initiative. He even installed the largest wind turbine in Chicago (he wrote the city code!), which saves the company $15,000 a month in energy costs. He told me he did it because he is completely passionate about being sustainable, and he knew he wanted to create a competitive advantage for himself which could NOT be duplicated by his competition.

But, the one thing Peter said that made me love him: “Yeah, my 85-year-old dad still comes to work every day to check on me and see if I am doing everything correctly!”

Hey Peter, we have more in common than I thought.

On the road,
Karen