Just this week, we started to see good supplies of fresh English Peas at our local farmers market and of course at the Los Angeles Wholesale Produce Market.

Most of us are accustomed to buying our English Peas already shelled — frozen or canned. But if you happen to see fresh in-the-pod English Peas, and have some time, give them a try.

It’s a lot of work shelling peas, but they are so fresh and delicious. When you pop open a pod, you will find between 3 and 5 single delicate peas. They can be eaten raw, added to salads, or lightly cooked.

I’m sure it was the laborious nature of preparing English Peas that was the inspiration for developing something better.

What if you could combine the sweet individual peas with the delicate, crisp edible pods of Snow Peas (used in Asian stir-fry recipes) to create a new vegetable that was totally edible — peas and pod.

It was Dr. Calvin Lamborn, a plant breeder working at the Gallatin Valley Seed Company of Twin Falls, Idaho, who created this new cross: Sugar Snap Peas! I’m not sure if it was BEFORE he was featured in the April 16, 1979 edition of People Magazine, or after, but Dr. Lamborn contacted Frieda’s back in 1979 and we began selling and marketing these special peas on his behalf. 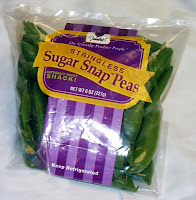 This was shortly after I returned from college and I so vividly remember introducing this new vegetable. I personally drew an illustration showing how to string a Sugar Snap, and this was included on our purple label. (We packaged them in bags to keep them moist and fresh.)

One of our first customers was A & P Supermarkets in Baltimore. We had convinced the local food editor (then Marian Burros, who went on to The New York Times) to run an article on the Sugar Snap Peas. And, once we knew when the article would be published, we contacted our retail customers in that area and encouraged them to have them in stock.

The morning that the story broke in The Baltimore Sun, we got a panicked called from the produce buyer at A & P.

“Shoppers are lined up outside our supermarkets (the stores didn’t open til 9 a.m. in those days), with copies of the food section in their hands. I don’t think we ordered enough of these Sugar Snap Peas! Can you fly more to me…TODAY?!”

It was a very exciting time in our company history.

Of course, today — 33 years later — there are many “new and improved” varieties of Sugar Snap Peas, Snow Peas and English Peas. Sugar Snap Peas are now found in veggie trays, alongside baby carrots (which we also had a hand in introducing in 1972) and cherry tomatoes. Our children are growing up enjoying so many fruits and vegetables that were not around when I grew up.

Stories like the origins of Sugar Snap Peas, Baby Carrots, Habanero Chiles and hundreds more like them, are what I get to do every day.