This Is Not A Drill

On the last day of my week’s vacation on Maui, as I was getting ready for my morning walk, the Emergency Alert went off on my phone at 8:05. 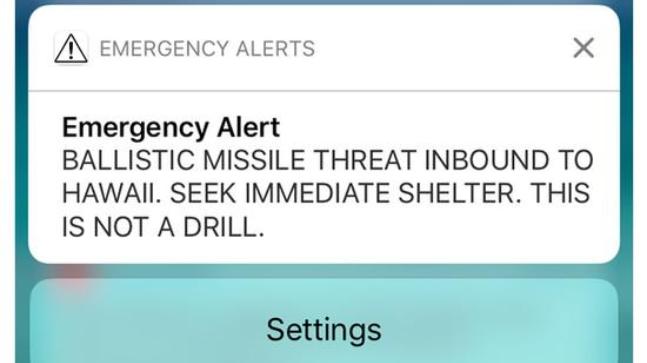 I glanced at the message, and heard the echo of the alarm going off on every cell phone of the hundreds of people, attending a medical trade show, who were in the same outdoor lobby area as me.

It became surreal when I read the words, “Ballistic Missile Threat” and “this is not a drill.”
Almost immediately, my cell phone rang. It was my daughter, Alex, calling me from our hotel room on the ninth floor. “What do I do, Mom?”

“Get your clothes on and take the stairs next to the elevator and I will be standing at the bottom of the stairwell.”

The only thing that went through my mind at that moment was September 11, 2001. What did the people who survived do if they were in the Twin Towers? (They immediately made their way to ground floor of the building.)

She was down the stairs and next to me in what seemed to be seconds.

I’m sure you’ve seen the posts on Twitter, Facebook, and in the news. Actually, we both were checking Twitter constantly to get some sense if this was really happening.

We were with hundreds of people on the bottom floor of a very large hotel. There was no screaming, no rushing, no panic. We saw young moms and dads holding their infants tight, with bottles and diapers in tow. We saw people struggling to get their pants on, as many rushed out of their hotel rooms with their clothes in hand. We did see people crying and many people calling their families and loved ones. The hotel staff directed us into ballrooms, which were large and “safe” (still not sure what that means). Everyone stayed amazingly calm.

So, what do you do when you learn that a ballistic missile is headed toward you? As it turns out, not a whole heck of a lot.

It’s not like you can go to higher ground, like when there is a tsunami warning. And none of us was aware of any shelter-type areas in the hotel (although I figured the stairwell would be the safest and most secure).

But most interesting was what I observed after the “all clear” sign was given.

All the business people went back to work. Our hotel was the home base for a medical trade show, so everyone went back to their booths.

I took a walk along the beach path and walked by four or five hotel pools, which normally would be surrounded with people sitting on beach chairs. There was no one at first. Then, within 45 minutes, all the chairs were filled. I overheard parents talking to their young children, saying things like, “it was OK to be scared.”

I also noticed for the rest of the day that there was an air of calmness, civility, and patience. I realize that I was in Hawaii, where everything is usually calmer than on the mainland, but even the tourists were nicer.

It’s like what happens at Christmastime…everyone is just nicer to one another. All of us strangers had faced a seemingly dire situation together that morning; it had bonded all of us on the island. So everywhere we went, people were nicer, patient, and considerate.

When Alex and I were driving to the airport, we debriefed on our morning. These are the things we discussed:

And, yes, I do plan to return to Maui later this year. No threat of a ballistic missile is going to keep me away from the beautiful skies, the warm beaches and ocean breezes, and the amazing food.