Sometimes I live in my own little exotic fruit world. I just assumed that when I wrote the word “quince,” everyone would know that I was referring to a fruit. That’s until one of my Spanish-speaking friends said, “fifteen?” (In Spanish, the number fifteen is spelled “quince,” and pronounced “keen-say.”) 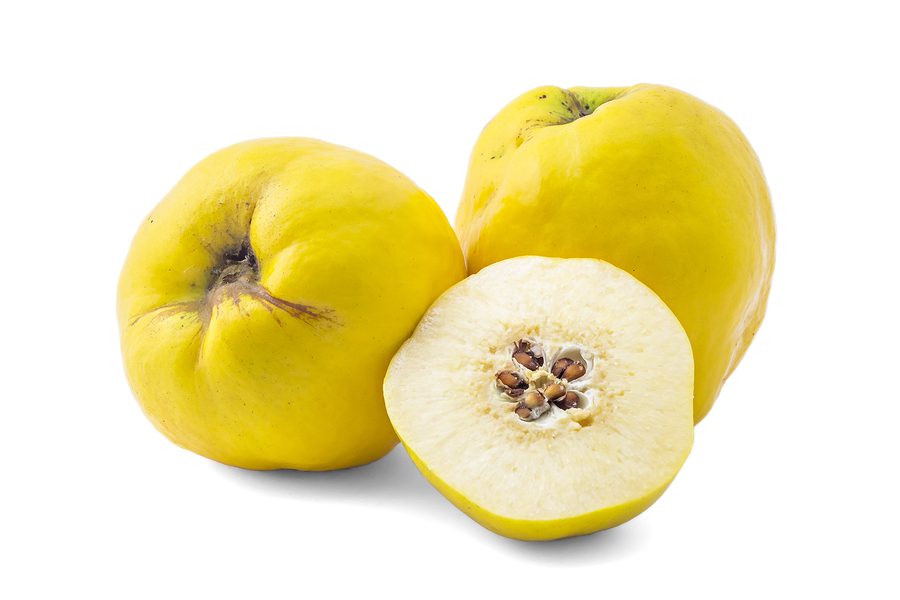 I am referring to QUINCE (pronounced “kwins”). Let’s start at the very beginning. Quince is a member of the pome family (which is the same as the apple). Interestingly, some believe that the apple which Eve tempted Adam with was actually a quince.

In the United States, we can find quince most times of the year. Right now they are sourced from Chile, where they are harvested in March and April and shipped here by sea container. In the late summer, fruit growers in California’s Central Valley will harvest and ship their quince. The number of commercial growers of quince has probably declined over the years, but I wouldn’t be surprised if they start to make a comeback, as this fruit is enjoying increasing popularity.

Quince are also called membrillos in Mexico, and the fruit pulp made from quince is called dulce de membrillo. You might find cubes of this gelatinous quince served on cheese platters, alongside dried figs.

They are also quite popular in Mediterranean and Middle Eastern cuisine. One of my first memories of quince was back in the late 1970s. We attended a produce convention on the East Coast and a fellow who sold packaging materials (I only remember that his name was Len), proudly came up to me with a jar of dark pink jelly as a gift.

Turns out his family was Lebanese and ever since they moved to the U.S., they longed for the lovely, fragrant quince they knew so well back home. When he found Frieda’s quince in his local produce market, he bought up everything, and took them home so he and his wife could make quince jelly. One of the unique qualities of quince is that it must be eaten cooked, as it is too tart and hard to eat raw. When you cook it with sugar, it turns from a pale whitish-yellow to a bright pink.

One more quince story… In the 1980s, one of our kiwifruit growers from Paradise, California, sent us dozens of cases of a new variety called “perfume quince.” They were long and oblong in shape, unlike the traditional round shape, and were incredibly aromatic. It was quite a challenge to sell this new variety, because they were very hard and virtually impossible to peel or cut. But I would tell my clients that they were a perfect item to put in their sock drawers to make them smell good.

If you want to try your hand at making quince jelly, click here for a recipe. (And here’s a recipe for quince chutney and quince brown betty.) Meanwhile, they are quite aromatic, so don’t be afraid to try one at your local market.