This past weekend, I traveled to Houston and drove about an hour to a city called Galveston to eat lunch at Mosquito Café.

Mosquito Café got its name because of the large mosquitoes that are everywhere in Galveston. My long time friends, Stephen and Patricia Rennick, moved from Southern California to Houston a few years ago and purchased Mosquito Café.

Stephen is an accomplished baker, which is how I met him 35 years ago. He owned a local Southern California bakery called Bridge Creek Bake Shop, where his quiche, cupcakes and cakes were so fantastic that I was a regular customer of his for years.

When they moved to Galveston, he went back to his entrepreneurial roots and bought a restaurant. But, just a few months later, Hurricane Ike hit the gulf coast. Bad timing.

After Ike, they lost everything. Their restaurant was completely under water and they spent 4 months without electricity. But, amazingly, they rebuilt everything and reopened last year. 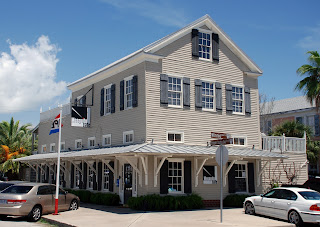 As you can see, the restaurant is located in the historic part of Galveston. And last year, they opened Patty Cakes across the street, which is a bakery featuring Stephen’s delectable desserts and bread. 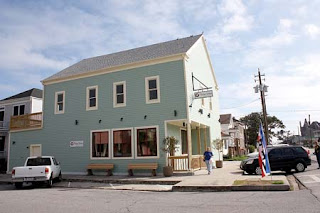 When I saw them last weekend, it was a thrill to see that both of their daughters, Sasha (32) and Kyla (29) have joined them in their business. It’s truly a family affair.

“I’m a vegan” was the first thing out of my mouth, not knowing what they might have to serve me. Patricia told me, “You have to have our ‘Health Nut’ for lunch – you’ll love it!”

When Stephen joined us at the table, he whispered to me that he believes Mosquito Café is the only restaurant in Galveston that serves vegetarian fare. They change their offering every week or two. You can check them out on Yelp, Urban Spoon and Zagat Guide to see why they have been rated one of the top 15 restaurants in the greater Houston area.

I guess it’s not a surprise that they have a vegetarian option. After all, the owners are from California!

I hope if you are ever in Houston, you take a drive to Galveston. It’s a beautiful area right on the ocean, and reminded me of South Carolina.

And be sure to go across the street to get dessert at Patty Cakes!