I am so glad that watermelons are “back in season.” Yes I know that they seem to be available all year round, but as my 16-year-old daughter Sophia has told me, “Mom, why do you keep buying watermelons in the winter? They don’t taste sweet – it’s not their season.”

So, frankly, I avoid buying watermelons until the weather has warmed up. In the last two weeks I have purchased two seedless watermelons and it’s almost time to put them on my weekly shopping list.

Seedless watermelons bring back such memories for me, because it was my mom, Frieda who first introduced and started marketing them back in the late 1960s. Yes, it’s been more than 40 years since Frieda’s started selling them! As I recall, the same couple (Art and Joyce Hood) who introduced Frieda to Pearl Onions – also brokered a small melon deal. With his cowboy hat and boots, Art seemed like a 7-foot-tall giant to 10-year-old me. He would drive in from the desert where he had found the first seedless watermelons.

Mom had a heck of a time marketing them to supermarkets in the beginning. After all, weren’t those inedible black seeds part of the fun of eating watermelons on a hot summer day? That’s how watermelon-seed spitting contests got their start! (Even seedless watermelons still have a few small, white seeds.)

Years later, there were other growers who got involved, and we started receiving watermelons from Central America. Then there were the Mickey Lee and Minnie Lee (Sugar Baby) personal-sized seedless watermelons. (Maybe they were invented at Epcot Center on the Disney property in Orlando?) 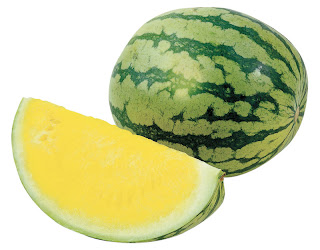 And of course today, there are many seed companies and growers who produce some great seedless watermelon varieties. And shortly, we will have Yellow Seedless Watermelons! (We used to distribute Orange Seedless Watermelons, too, but it seems they were not good producers, so all the commercial growers in the U.S. stopped planting them.)

We are all spoiled by the seedless varieties – it’s no wonder they have become so popular. In fact, today, the majority of watermelons grown in the United States are seedless.

Now, don’t get me started on how watermelons can grow if there are no seeds to plant. Go here if you want to know that!