What Are You Doing for National Kale Day?

Yes, October 5 is National Kale Day. Clearly this is not a “hallmark holiday” since we’re not expected to send cards or gifts to anyone. But it’s kind of fun to have a holiday that is centered around one of the trendiest, healthiest foods around.

I actually met the guy who is credited with co-founding, back in 2013, National Kale Day. Dr. Drew Ramsey is an assistant clinical professor of psychiatry at Columbia University in New York City, and I met him at a produce conference in Texas in April. I wrote all about how kale got to be so popular here, starting in 1996 with the Los Angeles Times publishing a poem entitled “Oh Kale.”

Well, you would have to be living under a rock, or on another planet, not to notice how popular kale has become in the last few years. In fact, it’s so popular that some say it has become the most overused vegetable in America. One might say we are “kaled-out.”

Kale is everywhere. Check out the latest T-shirt one of my work colleagues bought at Target for our “Silly T-shirt Day at Work.” 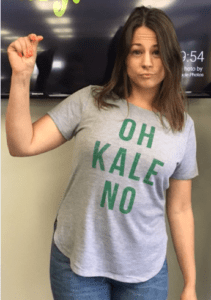 So, how do you plan to celebrate National Kale Day?

You could wear a cool sweatshirt to work: 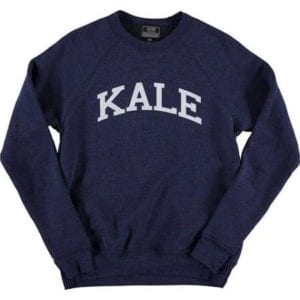 Or, you could order a chopped kale salad at your favorite restaurant. (They are usually on every menu—even Chick-fil-A has added kale salad to its menu!) 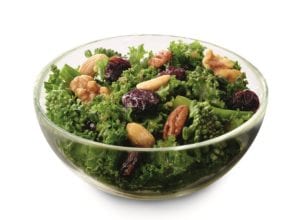 Or, you can do what I plan to do and make homemade kale chips at home with a friend. (I found this easy recipe on the Internet.)

Whatever you do, find a creative way to enjoy this awesome vegetable! It’s time to celebrate! 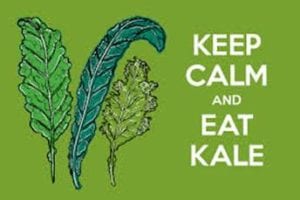