When the Student Becomes the Teacher

Many years ago, when I first started working for my mother, my position was primarily handling consumer and public relations. The goal set for me was to get to know every food editor in America, personally.

Remember, this was back in the 1980s, before we used the internet and email at our company, so developing relationships was about meeting people in person, corresponding by mail, and having meaningful conversations.

One of the first publications I targeted was Sunset magazine. The beautiful glossy magazine caught my attention, and the stories and recipes were top-notch. Our initial relationship was one my mother developed with the editor, Walter Doty, who was also involved in publishing Sunset magazine books. Through him, I was introduced to the food editor, Jerry Anne Di Vecchio.

Jerry and I developed a relationship, and at one point I put on my bucket list to visit the magazine campus in Menlo Park, California. Well, one day, on a trip to Northern California, I was able to arrange a visit. Jerry and her team in the test kitchen welcomed me with open arms. I got a VIP tour of the gardens, the test kitchen, and the editorial offices.

And then we went to lunch.

That is when I learned a valuable lesson from this inspiring and well-respected person. Jerry told me her secrets to interviewing potential job candidates for Sunset.

She took them to lunch. And ordered wine. Jerry told me that when you take a candidate out of the office, and to a meal, they tend to let their guard down. Also, she told me that you can learn a lot about a person by how they handle themselves at a meal. Do they have good manners? Are they adventurous (would they try something new)? Can they easily make conversation?

And then, her secret weapon, the wine. She told me that she found that people really loosened up when they had a glass of wine. And it was during this part of the informal interview that she learned whether she really wanted to hire a candidate. 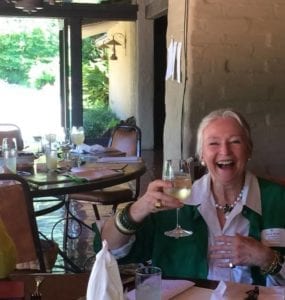 Jerry also told me that she took her time when deciding to hire someone. She said that if a candidate got antsy and impatient with the length of time for the interview process (sometimes weeks or months), then they would never do well at Sunset, as processes at the magazine tended to take a long time. Things did not happen quickly.

Now, more than 30 years later, I can tell you that I use these same practices at my company. Jerry was a great teacher, and she was also a generous and mentoring person. She willingly accepted my invitation to participate in a panel discussion for a produce industry convention in the 1980s and invited one of her favorite chefs to join us—Wolfgang Puck! That was my favorite panel.

After being a student of Jerry’s wisdom for more than three decades, I found out last week that I was able to share some of my learning with her.

Minutes after posting my blog entitled, “Using Uber Without a Smartphone,” I received this email from her:

“karen, what a help the phone access to uber is for me! not only is your produce wonderful, your life realities are in tune! my partner david is 88 and has finally accepted not driving. but, as you say, smart phone isn’t feasible—he won’t even use a computer. but he does love the phone.

Her email almost brought tears to my eyes, as my discovery of GoGoGrandparent is making her life better!

But like Jerry so wisely said, “My dear, the column takes time…keeping busy keeps the wheels turning.”