Why I Haven’t Installed the Latest iPhone Update

Let me put it this way: Mercury is in retrograde.

That sentence may or may not make sense to you, but I have written about that silly, menacing planet before. Here’s a quick recap.

In astrology, Mercury is the planet that rules communication, both interpersonal and electronic, as well as clear thinking, truth, and travel. Three to four times a year, the planet appears to move backward in the sky, known as “Mercury in Retrograde.” During such periods, you will find that things go wrong—more so than usual.

According to Greek mythology, Mercury represents the god Hermes who, in addition to being the messenger, has a reputation as a prankster. Hermes is a patron god of messengers and commerce, so no wonder everything business- and communications-related goes haywire when Mercury is in retrograde!

Interpersonal communications, such as speaking and listening, buying and selling, and negotiating, and commerce-related functions like transportation and logistics, travel, and negotiation, are affected when Mercury is functioning in its sluggish state. Delays and challenges are more probable, and these random mistakes or glitches can be costly.

Needless to say, it is not advisable to sign contracts, engage in important decision making, or launch a new business when Mercury is in retrograde. It’s also a good idea to plan for travel delays, communication disruptions with loved ones or customers, and technological failures during this time. (For goodness’ sake, back up your computer and network before Mercury goes into retrograde!) It’s like Hermes himself is pulling a prank on you. 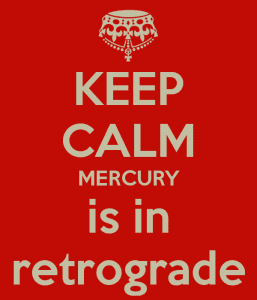 Unbeknownst to me, Mercury went retrograde on October 4 and remains so until midday October 25.

If you’re skeptical about this whole Mercury business and want some evidence, this is what I’ve witnessed during the last few days:

Mercury in retrograde is not all bad for everyone. If you are the creative type or like to think outside the box, then this is the period when you can make great progress. For everyone else, this is the time to sit back, relax, and wait for the tide to change.

So you can plan ahead, here are the dates when this celestial phenomenon will occur in 2015:

P.S. You can read more about Mercury in retrograde in the Huffington Post and TIME Magazine.