Why I Renewed My Subscription to Prevention Magazine

I really don’t have time to read magazines at home. Honestly, I have tried reading them when I crawl into bed at night, and it’s like taking a sleeping pill. Read a paragraph. Instantly fall asleep.

But there is one magazine I like to get at home: Prevention Magazine, published by Rodale Inc., which also publishes other health and wellness magazines like Women’s Health. So, when a postcard came in the mail reminding me my subscription had lapsed, I immediately signed up for another two years. 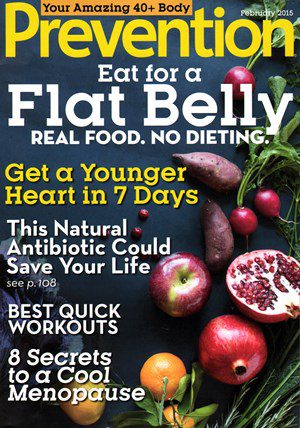 As you can see, it is small, approximately 5-by-7 inches, but it is packed with interesting articles on health, food, and fitness, plus human interest stories. Last week, the February issue came. Because it is only 130 small pages, I was able to get through it in a few evenings.

Last night, one article in particular caught my eye: “The Natural Superbug Cure No One Is Telling You About.” The article talks about MRSA—Methicillin-resistant Staphylococcus Aureus—infection, caused by a strain of staph bacteria that’s become resistant to the antibiotics commonly used. I think we’ve all heard about MRSA and how scary it is. It is also one of the reasons I rarely if ever let a doctor prescribe an antibiotic for me when I can get well by resting and using natural herbs, etc.

The article talks about Laura Roberts who had been ill for seven years with what started as a sinus infection and nearly ended up in death. While watching TV, she learned about bacteriophage therapy and then found the Phage Therapy Center in Tbilisi, Georgia, in Eastern Europe.

Bacteriophages or phages, also known as bacteria eaters, are viruses that infect bacteria but not humans. I found it incredibly exciting to learn that alternative treatments for bacterial infections are being developed in other parts of the world.

In a time when people use hand sanitizer as a preventative for getting ill (when in fact it would be causing you to be less resistant to fighting infections, colds, and viruses), and when drug companies advertise on television, on billboards, and in magazines suggesting we ask our doctors to prescribe medicines for us, it’s good to know that researchers are working on more natural options to fight illness.

Of course, in my business, we know that eating a diet rich in fresh fruits and vegetables, filled with nutrients and fiber, not to mention flavor, can help build healthier bodies. I wonder how long it will be before a doctor writes out a prescription for “at least 5 servings of fresh fruits and vegetables each day, and see me in 3 months.” But then I found out a produce prescription is a reality in New York City. The Fruit and Vegetable Prescription Program provides low-income obese or overweight children and their families with a “prescription” of redeemable vouchers to use for produce at participating retailers or farmers markets after a consultation with a doctor and nutritionist.

But, sometimes, our bodies can only do so much and we need medicines prescribed by a doctor or practitioner and plenty of rest. A perfect time to curl up with a few more magazines, I’d say.