About this time last year, I wrote about visiting the Richard Nixon Presidential Library in Yorba Linda, CA. Due to COVID, the library was only partially open to visitors, so that visit left me with the feeling that I should return to see more.

What a contrast! The Nixon Library is tucked in a heavily residential area, and is a popular venue for weddings, proms and other events. The teeny-tiny home where Richard Nixon and his four brothers grew up in are part of the Presidential Library complex. You get the feeling of Nixon’s humble beginnings. And through the permanent exhibits, I got a real feeling about the challenges of Nixon’s Presidency and the world in which he had to function as the leader of the free world.

In contrast, the Reagan Presidential Library sits on more than 100 acres and the main building is an enormous Spanish-style hacienda surrounded by gardens, plus both Reagan and his beloved wife Nancy, are buried there. There is a replica of the Oval Office with a curious twist.  According to our tour guide, when President Reagan came to visit the Presidential Library while it was being built, he commented that the ceiling wasn’t high enough and he wanted it to be an actual replica of the real Oval Office in The White House. So, the architect measured it, and indeed it was a few inches too short! So, the replica Oval Office was modified with a couple of steps down leading into the Oval Office, so that the ceiling was at the proper height (and when you exit, you walk up a short ramp, to put you back at the level of the rest of the museum).

But, the most magnificent part of the Reagan Library is the pavilion in which Air Force One is displayed. More than one-half of the room is glass, so that it appears (if you use your imagination) as if the plane is ready for takeoff. It is truly breathtaking to see the airplane, which carried several presidents and their entourages around the world. Frankly, it appears much less techy and fancy than the images you see on television.

As I walked through the many exhibits at the Reagan Library that were open that day, I was struck by exactly how numerous the challenges are that a sitting President faces on any given day. Literally, I turned to Jack while we were walking through one of the galleries at the Reagan Library and commented on how incredible the amount of pressure was and how many big decisions needed to be made by the sitting President—it was quite daunting.

Philosopher George Santayana is credited with saying, “Those who cannot remember the past are condemned to repeat it.”

I find studying history is most interesting and memorable, and I believe there is a great opportunity to learn lessons from the past. And it seems so much more real to me when I do it through the lens of people. That must be why I like biographies and autobiographies so much.

Visiting the Presidential Libraries allows me to learn about our own American history through the eyes of Presidents, past and present. One of the surprises for me was that there is so much more on display in addition to memorabilia of the President. There are temporary exhibits including other presidents, world events, books, movies and more. Most of the Presidential Libraries are set up for students to visit and to be a learning lab. And just like when you visit Washington, D.C., and our nation’s capitol for the first time—including all the monuments and museums—you leave with a new appreciation of our nation’s roots and the complicated journey over the past 200-plus years.

And so it has been for me. I’ve been able to relive the era around Nixon’s Presidency (1969–1974) and Reagan’s Presidency (1981–1989) from the time I was still in elementary school through when I gave birth to my first child.

The added bonus? While at the Nixon Library, there was an exhibit highlighting books on all the Presidents.  I snapped a photo of one, which I read last week titled, Team of Five: The Presidents Club in the Age of Trump by Kate Anderson Brower. Brower is a No. 1 New York Times bestselling author, and this book looks at the relationships between members of the Presidents Club and includes an Oval Office interview with President Trump. The “Presidents Club” is made up of the living Presidents and is an informal, yet important support group for the current acting President of the United States. The book was fascinating, as she spoke specifically about the personal and professional relationships between former Presidents Carter, Bush 41, Obama, Bush 43, and Clinton (jokingly called Bush 42 due to his close personal relationship with George H.W. Bush after they both left office) along with insights from her personal interview with Trump while in office. 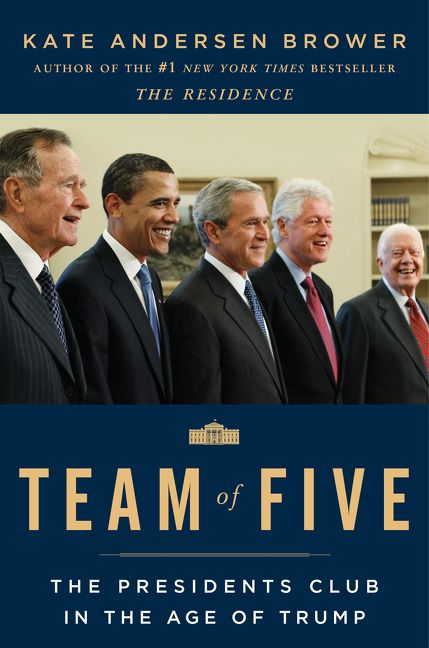 So, as you are making travel plans for 2022, I encourage you make time to visit one of these amazing fifteen repositories of American History that represent these Presidents:

Can’t wait to learn more history this next year when I visit at least a couple more!