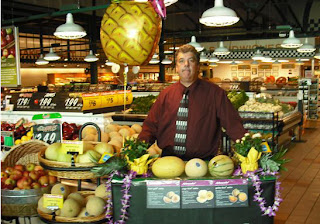 If you’re like me, you probably frequent two or three different grocery stores each week. But I do have a regular store where I buy my produce, and I bet you do, too.

Do you know your produce manager? Have you ever spoken with him or her? I recommend you get acquainted!

Having a relationship with your produce manager has its benefits! For example, if you are planning a party and want to be sure to have a special fruit or vegetable, if you know your produce manager, you can pre-order it. If you want to know if those grapes are sweet or that melon is tasty, he or she can tell you whether the timing is right to buy them. They can also recommend in-season produce that you may not even have thought about.

However, if you shop in the evenings (like most of us working folks do), you probably haven’t seen the produce manager. That’s because most produce managers come in about 5 or 6 a.m., and are gone by 2 or 3 p.m. One of their most important jobs is to take inventory and then place the orders for the department, which they must do first thing in the morning. Most large-sized produce departments get produce deliveries 5 to 7 days a week. Produce is usually shipped into the supermarket company’s corporate distribution center and then shipped out daily to individual stores, as they place their orders. Often times, stores get a “mixed load” of produce, dairy, meat, frozen items and some groceries, which is the most efficient way to do deliveries.

If you know what days and times your produce department gets their deliveries, you can then choose your shopping days accordingly, so you get the freshest products.

I know my produce manager, Paul, fairly well. I also have introduced myself to the rest of his staff and make it a point to say “hi” every time I visit the department. When I get to the store, I always visit the produce department. I stand back and take it all in. Does it look fresh? What’s on special? What looks good for my family this week?

I think it’s a great idea for everyone to say hello to the staff in their produce departments. Ask them “what’s good today?” Ask them how the melons and grapes taste, and which kind of lettuce looks the freshest. (It will also make the produce staff feel good!)

Did you know that jobs in the produce department are often one of the first stepping stones up the corporate ladder for supermarket employees? The Produce Manager position is one of the ground floor management positions, and many produce managers go on to do great things such as work up to the top store level position of Store Director. (Some stores across the country may do $50 million to as much as $100 million in sales PER STORE, so running a store is like running your own business.) Then, some may move into purchasing at the corporate level and on up the ladder.

One of my favorite success stories was a guy I met when I first started working for my mother back in the 1970s. I’m sure he started as a produce manager of a local store. His name was Richard (Dick) Gladden, and when I met him he was the director of produce for a supermarket chain called Alpha Beta (which was later purchased by Lucky’s, which was purchased by Albertson’s). By the end of his career, Dick had risen to the position of president of Alpha Beta! That’s a pretty impressive career, don’t you think? Dick retired a few years ago and we still see him at trade shows and hear from him via email.

So, next time you see your produce manager, I think you should introduce yourself. You’ll probably learn something about produce, and you never know when he or she might be the future president of the company!