Last month, Huffington Post’s Rebecca Orchant wrote about her plight as a foodie who confuses and frustrates supermarket cashiers with her purchase of “weird produce.”  As a consumer, I can understand how that feels.  You’re in a rush and the cashier doesn’t know what you’re trying to buy and takes too long to ring it up.

Instead of getting frustrated with the cashier’s lack of familiarity with specialty produce, I have a different idea.  I think we should appreciate the fact that we have such a wide variety of produce to choose from, even if it means a little confusion at the check-out.

When Frieda’s started over 50 years ago, there were only 65 items available in the produce department. 65. That’s it.  Back then, the checkers didn’t have any problems identifying the products by sight.  After all, there were only red apples, yellow bananas and brown russet potatoes. There were no 4-digit PLU (product look-up) code stickers or barcodes.

Fifty years later, the 65 items have grown to over 650.  Even the most basic of items come in more than one variety now. It is not just apples and oranges—it’s Granny Smith, Gala, Honeycrisp, and Cara Caras, Navels, and Moro Blood Oranges.  Peas and carrots? Try Sugar Snap Peas and multi-colored baby carrots. Tomatoes and potatoes?  How about Cherokee Heirloom tomatoes and Russian Banana fingerling potatoes? On top of it all, there are also organic varieties of just about everything.

The perfect example is the kiwifruit.  Frieda’s is credited with introducing and renaming the (green) Kiwifruit to the U.S. market in 1962.  Kiwis were once a specialty produce item, and now you can find them in virtually any supermarket.  Today, in addition to the green Kiwifruit, there are also grape-size Baby Kiwifruit, Gold Kiwifruit, and organic varieties of all three kinds. 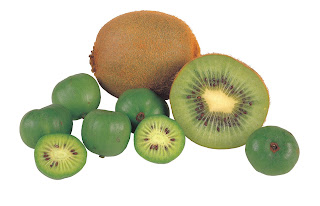 Like most things, when a new technology is introduced, some old-school methods go away. Four digit PLU codes on small stickers help make checkout easier and more accurate.  With these codes, cashiers are no longer required to recognize the produce by sight.  As a matter of fact, because the organic items are visually indistinguishable from the non-organic counterparts, you really need the PLU code to identify which one is which.

So, instead of getting annoyed at the hard-working cashiers, let’s turn this awkward situation into a learning opportunity for everyone.  Just start a conversation about the weird products you’re picking up.

“Oh, that is a horseradish root. I’m going to grate it finely and use it to spice up my mashed potatoes for Thanksgiving.”

“And this is a Horned Melon, also called a Kiwano®. I am using it to decorate my table for Halloween.  Actually, instead of having a Pumpkin carving contest this year, my kids will all be carving and decorating Horned Melons!”

To all my adventurous, produce eating friends, aren’t we lucky to have all these delicious conversation starters to make our normal, boring trip to the grocery store a little more interesting?

If you are a regular reader of my blog, then you know that I became vegan in August 2012.  I have continued to have a 90% plant-based diet, fitting in egg whites and fish occasionally for protein.

As of late, I have been seeing more and more information about the popularity of plant-based, or vegan, diets. Recently, the headline, “This Year’s Oktoberfest Caters to Vegans” of a Specialty Food Association article caught my attention.

Oktoberfest is the world’s largest fair held annually in Munich, Bavaria, Germany. It is a 16-day festival running from late September to the first weekend in October, with more than 6 million people from around the world attending the event every year.

This NPR blog article entitled, “Meat-Drenched Oktoberfest Warms to Vegans” caught my attention because when I think of Oktoberfest, I think about beer and bratwurst.

According to this blog, more than 8-9% of the German population is vegetarian. That’s over 7 million people! In fact, vegetables have become so hip in Germany, the Green Party used them as part of their platform in national elections last month. The party campaigned for a weekly “veggie” day in corporate cafeterias, where most German employees eat a free lunch.

Can you imagine the impact here in the U.S.A., if state and county fairs offered baked potato wedges, fruit kabobs and veggie wieners, instead of fried Twinkies, corn dogs and ice cream? What kind of impact would that have on our food choices? 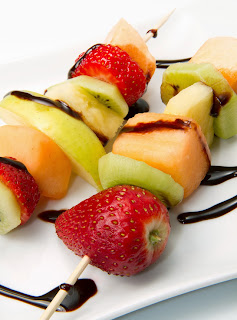 It is probably no coincidence that a friend of mine forwarded another NPR blog to me a few weeks ago entitled, “No bitter pill: Doctors prescribe fruits and veggies.”   It’s a quick story on New York physicians who are now writing prescriptions for fruits and veggies. In the article, you can listen to the story about how the Fruit and Vegetable Prescription Program™ is the creation of Wholesome Wave, a nonprofit that connects the low-income population with local produce.

So, get ready for your next trip to the doctor:

After the nurse takes your blood pressure and weighs you, the doctor writes you a prescription for “Eat 1 serving of Broccoli, Strawberries, Carrots, Kiwifruit and Cauliflower 5 times a day.  Repeat for your entire lifetime.”

This week was an interesting one to be in Washington DC.  I was there as part of the produce industry’s annual Public Policy Conference, and of course we had visits scheduled with our elected congresspersons.  But many were cancelled as part of the government shutdown.

As it turns out, the highlight of the week was a special dinner at the Newseum, the official Museum of Journalism, and I have written about it here before.

On Monday evening, I was invited to a dinner prepared and narrated by Chef Walter Scheib, who was the White House Executive Chef from 1994 – 2005.  He served both the Clinton and George W. Bush families and had more than a few funny stories to share. EDIT: Chef Walter passed away in June 2015 in a tragic hiking accident.

You can see the four course dinner we enjoyed on this personalized menu.

Since I am a part time (90%) vegan, it was fun to hear about the first course, Red Curried Sweet Potato Soup, which the chef created when Chelsea Clinton went vegan in high school.  And to learn that Britain’s Tony Blair suggested that the chef add “a piece of halibut” to the Soup to make it a main course meal was so interesting.

The third course (the salad), was created when President George W. Bush told the chef that he didn’t like anything green (much to the chagrin of first lady, Laura Bush), so the “salad” was a Tamale Tart (aka a Quiche), on top of slices of avocado, orange and sweet onion.

The chef has an interesting personal story, starting with flunking out of college. He learned his love of cooking from his mother, and as a fluke, applied to the CIA (The Culinary Institute of America in Hyde Park, NY), and was a last minute acceptance to his class.  Not a surprise to me, he finished at the top of his class. And how did he end up as the White House Executive Chef?  He sent in his resume, along with more than 2,000 other chefs, but it turns out it was his persistence and a follow up phone call to the office of the White House Usher that got him an audience with the First Lady and her “Kitchen Cabinet” who chose the Chef.  If you want to find out more about Chef Walter Scheib, you can check out his website.

My daughter Alex and almost 200 other guests enjoyed the dinner and the fun anecdotal stories the chef shared about his experiences at the White House.  He told a few stories before each course, shared his inspiration for each recipe, and then eight servers magically appeared from the kitchen and served each course in a synchronized fashion.  When he stopped by our table, between one of the courses, I asked him about the synchronized serving.

He told me that was one of the techniques he perfected while at the White House (and I could tell he was pleased that I had noticed).

It was so nice to personally meet the chef when he stopped by our table.

So, dinner with Chef Walter Scheib has once again inspired me to cook and entertain more, maybe not with the style and flourish of the former White House Executive Chef, but I will have to think up some fun stories to tell before my dinners.