Like everyone in America, I was deeply shocked, saddened, and devastated last Friday to hear the news that there was yet another shooting at a school. This time in Santa Fe, Texas, where 10 students were gunned down and 13 more were injured.

The news took the wind out of me. I don’t know about you, but I felt helpless.

Two days later, with the shooting still fresh in my mind, I attended the annual Women Against Gun Violence luncheon, just as I have for almost 20 years. Founded by my friend Ann Reiss Lane, a former commissioner of the Los Angeles Police Department, WAGV was celebrating its 25th anniversary at this event.

As she tells it, Ann was inspired to start WAGV while serving as a police commissioner after she received a call from feminist Betty Friedan, asking, “What are YOU going to do about the NRA’s campaign to sell guns to women?”

In response to Betty’s call, Ann and a few of her L.A. friends gathered acquaintances, family members and others for a three-day conference to examine the sale of guns to women, and so much more. They ended up starting WAGV to reduce gun violence in Southern California. 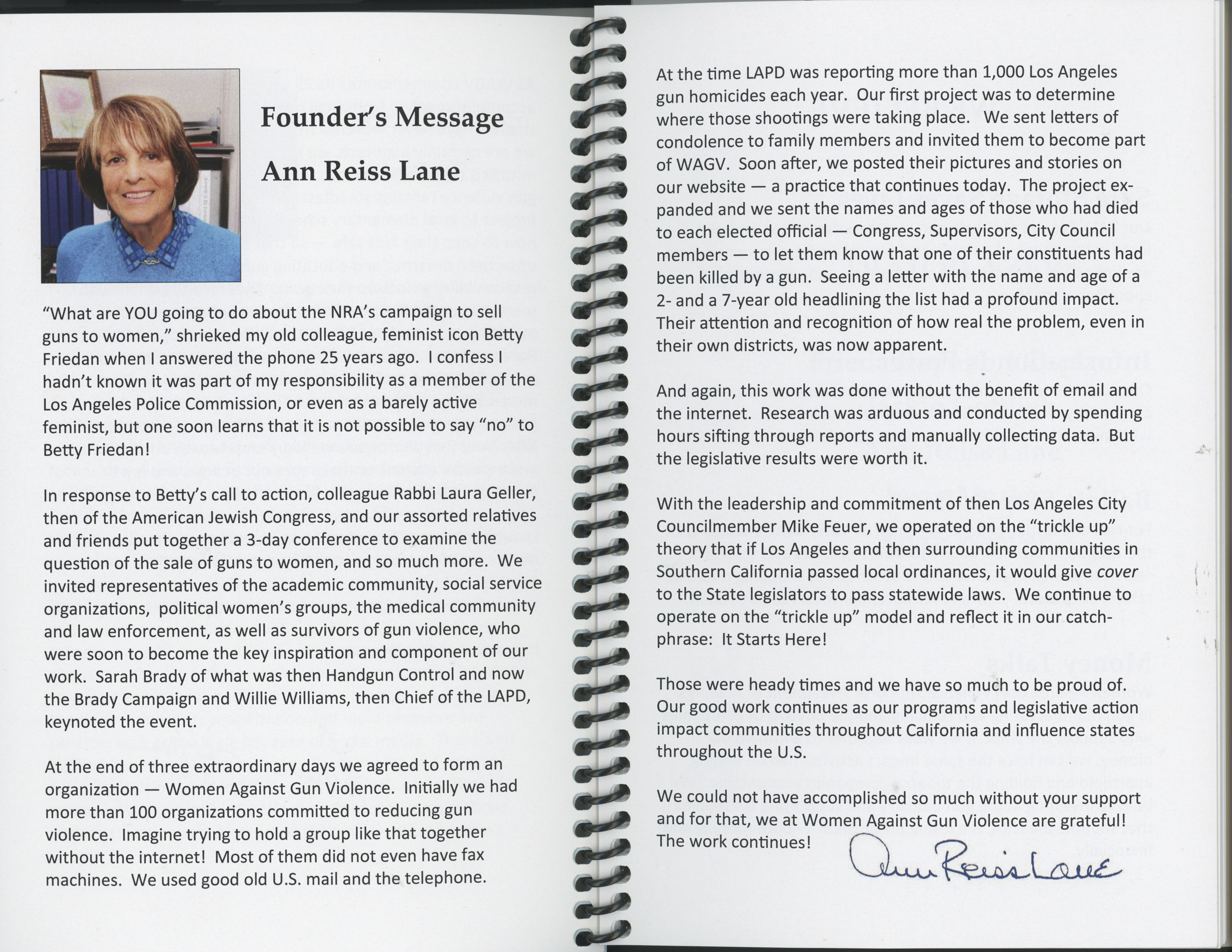 These luncheons are always filled with surprises and inspiration. I remember the WAGV luncheon I attended when then L.A. Police Chief Bernard Parks got up to tell the story that every time someone was killed in Los Angeles while he was chief, he got a personal phone call. One morning his phone rang. He told us what it was like to learn that a very young girl had been shot and killed. That young girl was his granddaughter.

At this year’s luncheon, I was surprised to see a 9-year-old girl go up to the stage with her father.

Her name is Madison Rude.

Madison told the story of when she and her dad, Steven, were at Barnes & Noble bookstore a few months ago. Passing by the magazine rack, she noticed more than 20 magazines promoting guns, photos of guns, guns sales, etc. She asked her dad why Barnes & Noble was selling gun-oriented magazines and displaying them at eye level where young children could see and pick them up. He didn’t have an answer.

So they discussed it, and when they got home, Madison wrote a letter to the CEO of Barnes & Noble asking him to move the magazines. And then she waited. She never got a response. She actually called and emailed his office multiple times over the next few weeks, but never heard anything back.

But when they went back to that very same Barnes & Noble several weeks later, Madison noticed that almost all of the gun-oriented magazines had been moved to another display area out of the sight of young children. She asked the manager why the magazines were moved. The manager didn’t know.

At this point in the presentation, Madison told the audience that there were postcards at each of our tables pre-addressed to Demos Parneros, CEO of Barnes & Noble. She encouraged each of us to take one, sign our name, and mail it to Mr. Parneros.

When Madison got up in front of over 360 people at the WAGV luncheon, I was inspired and moved beyond measure. I realized instead of being scared and doing nothing, she took action and spoke up.

I think that’s called being an activist.

I’m sure that everyone in the audience that day was thinking the same thing I was. The same thing they thought when they saw Emma Gonzalez, a student at Marjory Stoneman Douglas High School in Parkland, Florida, speak at a rally following the senseless shooting at her high school.

These young people will speak up and fearlessly confront the most difficult issue with courage and conviction.

Watch out world. They’re coming to change everything.