A CEO ‘Getting Naked’

I was invited to be a panelist at the THRIVE AgTech Innovation Forum held last week in Menlo Park, California. After lunch, the program focused on what the consumer wants from the fresh produce industry and what insights that may provide for the technology business.

I was excited to meet Michael, as I had been following his career for many years. He is the third generation of the Raley family to own and operate the 82-year-old chain of 127 stores. 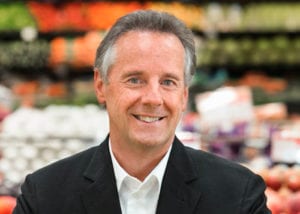 Michael started off talking to the standing-room-only audience of more than 200 people. To me, he “got naked” with the audience about his professional management philosophy and his business.

He told us that the way the grocery business works is that typically big food companies (consumer product goods or CPG companies) develop new products. They present them to retailers, along with financial incentives and support, so the retailers will stock and advertise them in their stores.

About two years ago, Michael started an initiative at his company that was pretty radical. He decided that his company would adjust some of the ways they received financial support from these CPG companies by focusing on what was right for his own customers. Raley’s would put its customers first when making decisions about product mix, marketing, and displays.

He referred to this entire initiative as being “purpose-driven,” meaning Raley’s’ higher purpose would drive everyone’s behavior and decision-making. And it was born out of his desire to improve the health of the families that shop in Raley’s. His vision is to “infuse life with health and happiness.”

In support of the initiative, Raley’s removed all tobacco products from stores in 2015. Last year private label sodas that contain high fructose corn syrup, and artificial colors and flavors, were discontinued. Check-stand offerings were improved by removing all artificially sweetened sodas and upgrading the selection of snacks and treats.

Then the most interesting thing happened—same store sales and customer satisfaction both increased. Prior to the initiative, same store sales had declined for a few years.

My first question to Michael after our panel was: “How did your buyers feel about your decision?” He said that at first they were a bit surprised and had some adjusting to do. But in the end, they welcomed the strong direction and support from their leader. The initiative made their decision-making a lot easier. To some degree, he infused their lives with health and happiness too.

I first became aware of purpose-driven organizations about 10 years ago, when I worked with a consultant named Paul Ratoff. He helped us redefine Frieda’s strategy and purpose over the next few years. Two years ago, Paul published a book, “Thriving in a Stakeholder World.” The tag line for the book is “Purpose as the New Competitive Advantage.”

Meeting Michael Teel and seeing how a purpose-driven organization can deliver better bottom-line results was exciting for me.

Can you think of other purpose-driven organizations? Many charities naturally come to mind. My prediction is that, with the increasing number of millennial entrepreneurs, we will begin to see more purpose-driven companies grow and thrive.

P.S. I was proud to have two other produce industry leaders on the stage with me that afternoon: Bruce Taylor of Taylor Fresh Foods (you’ve seen their packaged salads and veggies in your local supermarket) and Kevin Murphy of Driscoll’s (their strawberries, raspberries, blackberries, and blueberries are known worldwide for their amazing taste and quality).