Anyone who knows me is probably shocked to see me writing about Tom Brady of the New England Patriots. It’s no secret that I don’t pay much attention to sports—but I love attending live sporting events. I haven’t been to a football game in a while, but I am well aware of the Super Bowl, which now seems better known for the commercials that show during the game than for the actual game. I did spend the afternoon at my daughter’s watching the game, but that’s not what I wanted to talk about.

I’m an avid reader of The Wall Street Journal and an article in the February 1 edition caught my eye: “Meet Tom Brady’s Shaman.” I was intrigued.

The article highlights Brady’s admiration for the book “The Four Agreements, a Practical Guide to Personal Freedom” by Don Miguel Ruiz. 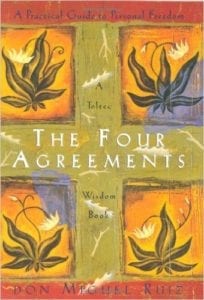 I first became aware of this book when my longtime designer friends, Ted and Peggy, mentioned this Toltec shaman to me back in the 1980s. They traveled and studied with Don Miguel Ruiz, even before he wrote this book in 1997. And in fact, when I first got the book, I read the forward, and sure enough, I saw Ted and Peggy’s names listed with the acknowledgements.

The book is small and a quick read, and Don Miguel’s wisdom is so simple and straightforward.

Here are his four agreements:

Many things have been written about Tom Brady. He’s 39, but looks 29. He takes perfect care of his body. He is very private and an amazing athlete. And now, we can add to that list “ardent student.”

Although Brady went through a rough patch with Deflategate, it was nice to see that he has a more spiritual, grounded side. In a time when many athletes are not great role models for young people, with their foul language and poor behavior (both on and off the field/court), it was refreshing to see how he used The Four Agreements as his new compass. The Wall Street Journal article quoted Brady as describing the book as a “kind of a mantra for my life,” and indicated it helped him navigate the urgent intergalactic crisis that was Deflategate.

Each of us would do well to consider these four short sentences as a way to approach our work, our life, our friends, and our family.

I can honestly admit that I never thought the Super Bowl would inspire me to re-read a book. But after Brady, one of the best athletes of our time, helped win a fifth Super Bowl for the Patriots and I learned that he finds strength and vision in this book, I went home and picked it up again.

I suggest you consider doing that too. Remember, don’t make assumptions.

Electronic Or Paper? Is This Jan? It Is My Pleasure
Previous | Next

Electronic Or Paper? Is This Jan? It Is My Pleasure