Well, if that title doesn’t catch your attention, then I don’t know what will.

Last weekend while attending a produce conference in San Antonio, Texas, I was able to meet and hear Drew Ramsey, M.D., who co-authored the cookbook “Fifty Shades of Kale.” His day job is as an assistant clinical professor of psychiatry at Columbia University in New York City. He is also a leading proponent of eating for brain health.

After hours, he is better known as the co-founder of National Kale Day, which is celebrated every year on October 5.

Dr. Ramsey’s premise is that if you choose foods that feed your brain (admittedly the most important organ in your body), it will help ensure a well-functioning body and predict your current and future health.

Highlights from his talk:

Dr. Ramsey talked about the top 11 food plants, in terms of nutrient density. It’s not a surprise that most of them are trending and showing up more often in produce departments and on top restaurant menus:

In case you’re wondering how kale got to be so “suddenly popular,” here is “The Rise of Kale,” according to Dr. Ramsey:

Dr. Ramsey is a prolific writer and his byline appears regularly in The New York Times, The Huffington Post, The Wall Street Journal, The Atlantic, and Men’s Journal. He has a new book coming out next month, “Eat Complete: The 21 Nutrients that Fuel Brain Power, Boost Weight Loss and Transform Your Health.”

What I liked most about Drew is that he is approachable, humble, married with two young children, and is sincerely passionate about his work. After his talk, I listened to him patiently answer question after question from audience members who had individual, personal, health questions.

I already pre-ordered his book. And I have made some changes and tweaks to my diet to add more good fats. Thank goodness I already eat a diet rich in his top 11 plant foods.

P.S. Here is a photo of Dr. Ramsey and me after his talk. 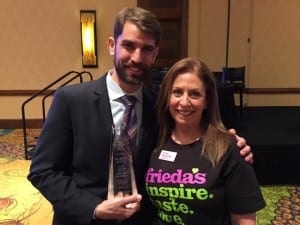