Tomorrow, April 2, is a very special day. It is “Love Your Produce Manager®” Day, a national day first celebrated in 2012.

I usually make a point of going into my local Ralphs where I shop and saying a special “thanks” to my produce manager, Paul. Last year, I even wrote about one of my produce guys, Carlos.

This year, I am in San Antonio, Texas, attending a produce trade show called “Viva Fresh.” It’s mostly Texan and Mexican growers and buyers having conversations and displaying their produce. I arrived a day early and naturally took the afternoon to visit supermarkets.

If you’re from Texas, especially the San Antonio area, you probably shop at HEB Grocery or their sister company, upscale retailer Central Markets. HEB is the quintessential, privately held retailer that has oodles of hometown pride. The company is based here in San Antonio, but has stores in many parts of Texas.

So, as I visited a few of the markets during the afternoon, my timing seemed impeccable. I was able to say hello to every single one of the produce managers at each of the stores. I was traveling with a colleague from work; she commented to me how friendly and interested each of the produce managers and all the produce personnel were when we said hello. Of course, I know that’s part of the culture at HEB, but I also know that in Texas, people in general are exceptionally friendly, in contrast to the fast-paced, always-in-a-hurry approach we have in Southern California.

I’d like to introduce you to Jacob, the produce manager at one of the stores. 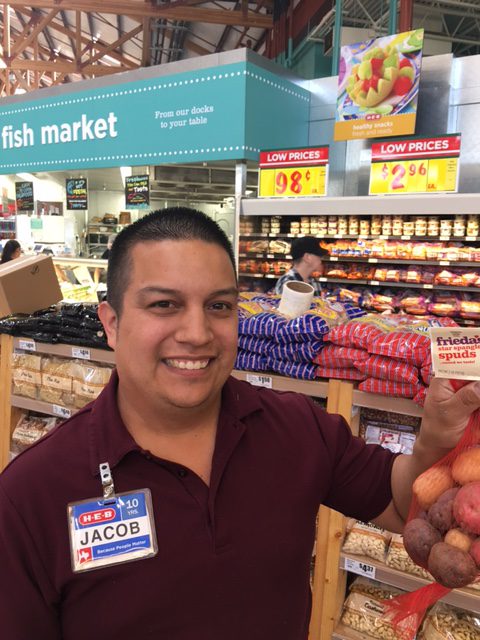 You can see from his name badge that he has been with HEB for 10 years. And from his big smile, you can tell that he really enjoys his job.

As I was getting ready to say goodbye to Jacob, he asked me if I had said hello to their foodie, Ramiro. I had heard of Ramiro, as he has contacted our office many times, asking for information about our products, but I had no idea he was actually in this store. 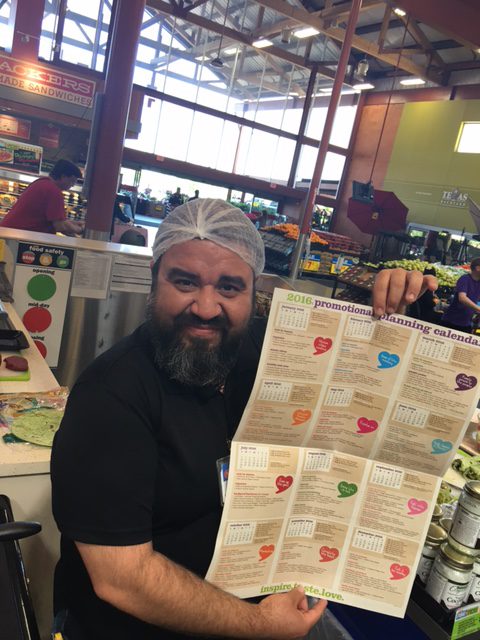 Yes, his business card says, “Foodie.” He shared with me that he went to culinary school in Chicago and was actually a trained pastry chef for an upscale retailer there. He moved to Texas a few years ago and is passionate about educating people—especially children—about healthy eating. And he works almost full time at the HEB store, sampling fresh produce, educating consumers about new foods, and demonstrating easy recipes to inspire them. 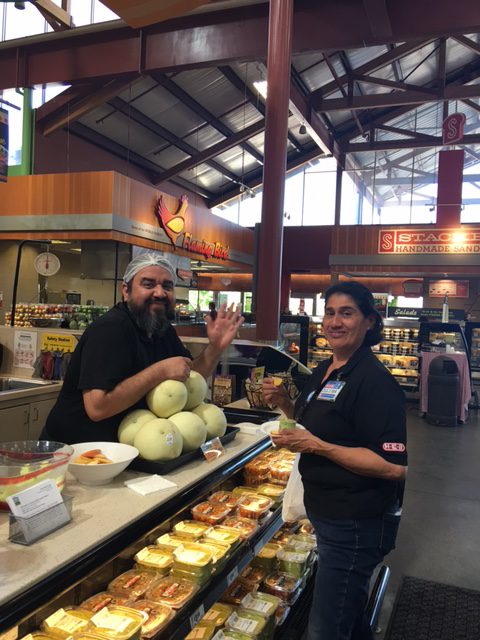 And that’s when I was reminded about Love Your Produce Manager Day. I wondered how many produce managers out there are like Jacob and his colleague Ramiro who have worked for their companies for many years. They love inspiring their shoppers to try new fresh produce items. They keep their displays fresh and full.

Wouldn’t it be great if, as a consumer, you made a special effort next time you are in your market to ask for the produce manager and tell him/her in person how much you appreciate his/her hard work? You can also say thanks for helping you feed healthy foods to your family.

I think you would make their day!

And what if you snapped a selfie of you and your produce manager, and posted it for all your friends to see on Facebook, Instagram, and Twitter? That’s what it’s all about! Feel free to share your photos with us by including hashtag #LYPM.

Have a great weekend!