This past weekend, I participated in my second “Race on the Base,” a community event here in Los Alamitos—where I grew up and where Frieda’s is based.

The event on the Joint Forces Training Base is well known for its reverse triathlon race, 5K walk/run, and 10K run. Organizers added an evening fun run for kids on the night before a couple of years ago. Triathlon competitors run and ride their bikes on the actual airfield and swim in the Aquatics Training Center.

When I was in Stockholm, Sweden, in May for an international women’s conference, I was pleasantly surprised when a former Olympic athlete noticed “Los Alamitos” on my name badge. She asked, “You’re from Los Alamitos? I’ve trained there at the Base!” Up until then, I didn’t know the women’s national water polo team trains right here at the aquatics center!

One of the best photos I took on Saturday morning before I started my 5K, was of the sky, of all things. They say it never rains in Southern California. But in Los Alamitos, if often rains parachutes! And what a sight. 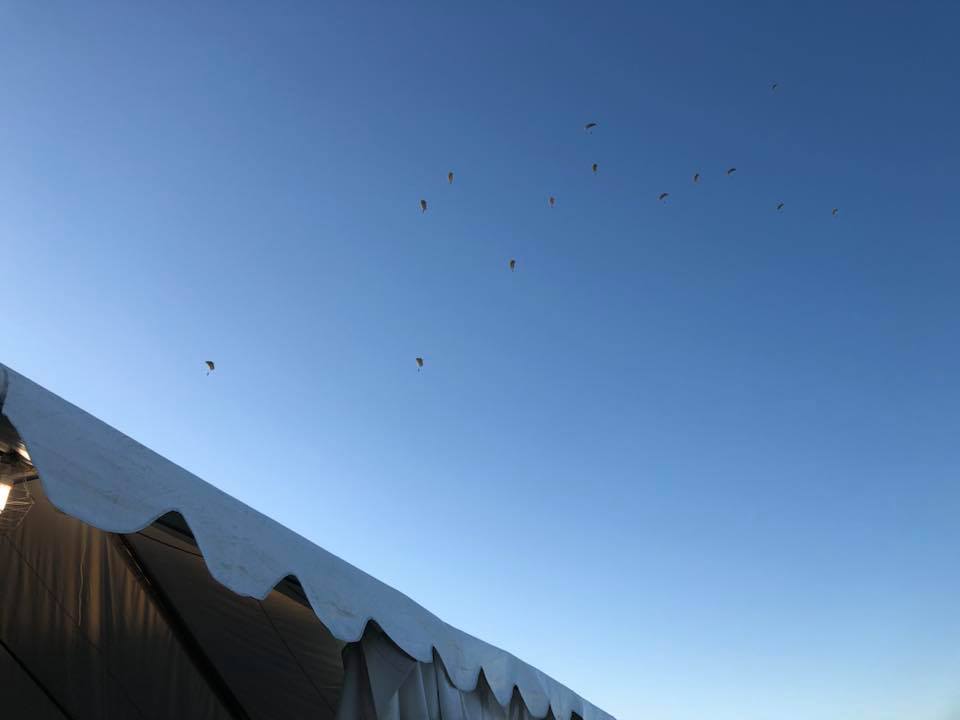 The Base sits on more than 1,300 acres and employs more than 850 full-time people and more than 6,000 National Guard and Reserve troops. It was formerly operated as the Naval Air Station, which also includes the Los Alamitos Army Airfield. Not a lot of people know that when Air Force One lands in Southern California, it will oftentimes land in our backyard! Even the Blue Angels have been hosted here for air shows.

Some of my local farmer friends grow strawberries and cauliflower on the Naval Weapons Station in Seal Beach, just a few miles down the road. (They lease the prime agricultural land from the government.) They often talk about the helicopters and fighter jets going in and out of the Base as the Army reservists and National Guard units train.

Many of the people who live in our community are employed at the Base. At lunchtime, it’s not unusual to see men and women in military uniforms in our local restaurants, and we all know they are reservists or active duty, serving our country.

A couple of times a year, the Base opens to the community. One is for a Fourth of July Fireworks Spectacular before which you can set up your picnic on the fields, then watch a professional fireworks show. And the other, of course, is Race on the Base. These events really bring us all together: residents, businesses, and the military.

I always diligently talk about our Base with visitors. Can you tell that I’m very proud of my community?