I left my heart in San Francisco 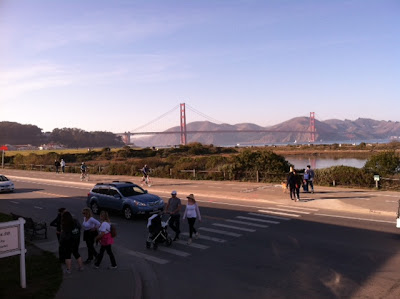 This past weekend I took my youngest daughter Sophia, on her first business trip. Each January, the National Association for the Specialty Food Trade (NASFT) holds the Fancy Food Show at the Moscone Center in downtown San Francisco. I like to attend this show — even though they don’t typically have any fresh produce — as many of the newest foods and food trends start here.

Since the show starts on Sunday, I decided that Sophia and I would fly up on Saturday morning and spend the day touring the city, and then attend the show on Sunday.

We actually flew into Oakland Airport (in the East Bay) – my preference whenever I travel to San Francisco. The airport in San Francisco (SFO) is often plagued with fog delays. (A tip for anyone coming out west for a vacation or business – fly into Oakland!)

Sophia is a high school senior, so we spent the first part of the morning visiting San Francisco State University, which is located south of Golden Gate Park near Daly City. She has applied to this school so it was a good opportunity to see the campus, which is beautiful, green and very friendly.

We then headed over to the Ferry Building (located in the Embarcadero area, nestled under the Bay Bridge), which is the home to a Saturday morning farmers market and a collection of some amazing artisan food producers, all housed in a historic building.

After snacking on lunch and my BEST FIND of some very yummy vegan kale chips I did something that I have resisted for years: I bought two tickets for the Hop On /Hop Off bus tour of San Francisco. (I first rode a Hop On / Hop Off bus when I was in London about 13 years ago with eldest daughter Alex. Great way to get an overview of a city). 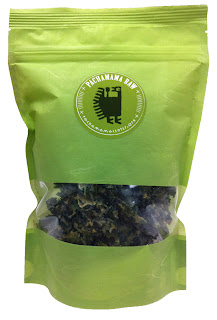 We rode on top of the red double decker bus and learned about everything from the Disney Family Museum which is housed in the Presidio, The Japanese Tea Garden which is in Golden Gate Park, the Haight Ashbury section of SF. (I tried to explain the popularity of that area to my 17-year-old daughter… I was definitely dating myself when I used the words, “hippies” and “flower children.”)

Even with the bus tour, we ended up walking more than 7 miles on Saturday. I know this thanks to my Nike+GPS app on my iPhone. But, we were just prepping ourselves for our walk around the Fancy Food Show on Sunday.

Sunday morning we arrived at show early so we could pick up our badges. This show has three large halls filled with more than 1,000 booths that are usually 10 x 10 feet. Oftentimes you will find the owner(s) and their family members and friends staffing the booths, handing out samples of their latest products. Most exhibitors are small companies with less than 10 employees who may have started by hand producing and packaging their products.

So, what’s going to be “hot” in the coming year? 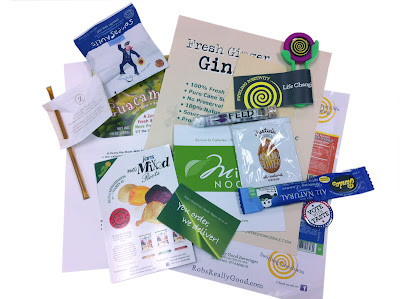 • Gluten-free and vegan selections were definitely everywhere. Whether it’s gluten-free cookies or salad dressings, I could see a big trend of adding the words “gluten-free” to the label, as consumers are demanding this feature.

• Loose leaf tea. Unique new blends, some highlighting medicinal properties, were in full force, along with all the latest tea accessories. Clear glass tea pots and teacups are definitely “in”.

• Olives. No wonder olive bars have become prevalent in upscale supermarkets – who knew there were so many types of freshly cured olives!

One of the most encouraging things about this show was this giant sign I found in the middle of the show floor. 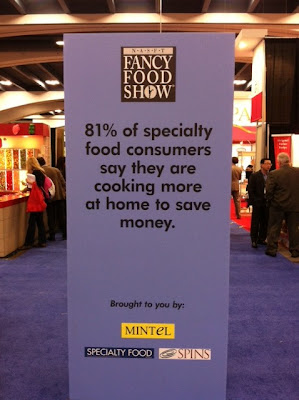 Like all trade shows, there had to be a giant, attention-grabbing stuffed animal character. Here’s Sophia with a PANDA who was sampling something yummy. 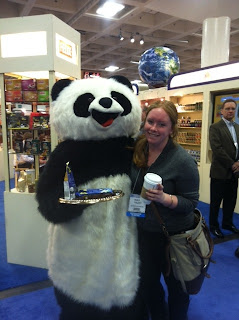 I asked Sophia to share her observations of the food show:
• There are so many companies and many have very similar products – it was overwhelming. (I felt the same way.)
• What really made a company stand out was when the people working the booth were engaging (but not too pushy).
• There were so many samples that you have to pace yourself, and it helps to know what you are looking for. (Great perspective if you are a gourmet food retailer attending this show for the first time.)
• You only have one chance to make a good first impression.

The best part of this weekend excursion is that when we arrived back home to So Cal, Sophia received an email that she was accepted into San Francisco State University! A perfect ending to our weekend!