Turning your passion into a business

Last week I wrote about my recent trip to the Fancy Food Show in San Francisco. Held by the National Association of the Specialty Food Trade (NASFT), this show brings together many foodies, producers of artisan foods and buyers, and many others.

For many, it’s also a show for reuniting with old friends in the food business.

As I headed down the last aisle on the show floor around 3 p.m. that Sunday, a big smile came over my face. I saw my long-time friend, Paula Lambert, of the Mozzarella Company in Dallas, Texas.

Paula started The Mozzarella Company in 1982 – which means she is celebrating 30 years in business. My mom and I met Paula years ago at another food conference – I think it was the American Institute of Wine and Food. That’s where we also met Julia Child.

When I came up to Paula’s booth at the Fancy Food Show, she had laryngitis. One of her cheeses (Hoja Santa Goat Cheese) had won a national award the afternoon before at the Good Food Awards at the Ferry Building in San Francisco and she had spent the afternoon handing out samples and talking with consumers (thus the laryngitis).

Since I was travelling to Dallas for business the following week, I asked if Paula wanted to get together in her hometown when she had her voice back.

So, during my trip to Texas last week, I caught a taxi and was whisked off to a small community near uptown Dallas.

Paula’s home is adjacent to a cemetery and after navigating down a cobblestone walkway, and through a rusted gate (I felt like I was in a Harry Potter Movie), I came upon a Booziotis-designed modern home. I then felt like I was walking into an Architectural Digest photograph.

Paula recently became a widower, so she always fills her home with friends and food. It was my great luck to share a short dinner with she and her longtime friend and former neighbor, Bill. And of course, we sampled many of the cheeses she makes in her local cheese “factory.” 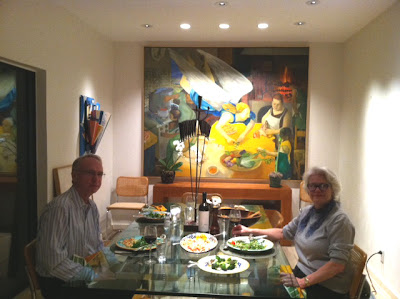 My absolute favorite was what she calls the “Christmas Cheese.” It has the texture of polenta, and crumbly cheese with chile pepper overtones. I could not stop sampling it! 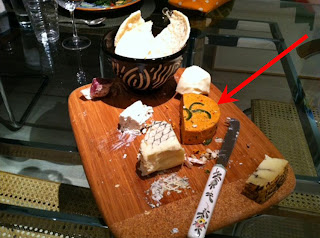 I asked Paula how she ended up starting a cheese business, in Dallas, of all places.

When Paula was younger, she lived in Perugia, Italy to learn Italian. After returning to Dallas, she missed the delicate homemade cheeses of Italy. Thus, her idea for a business was born. That was 1982 (and you can read about it here). Paula has grown the business from producing 100 pounds of cheese her first week, to now more than 5,000 pounds a week!

Not only did Paula and I sample some of her amazing cheeses, we also made dinner together. I found out that Paula takes small groups to France and Italy twice a year to cook in farmhouses. She’s a fabulous cook, so, it was especially fun for me to learn a new way to prepare broccoli and a recipe for homemade vinaigrette from her. 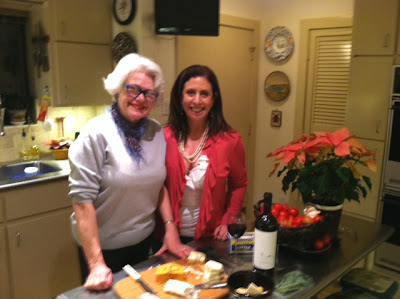 If you love cheese (and who doesn’t), I encourage you to check out her clever website, MozzCo.com! You may even want to order some cheese from her.

One of the joys of being in the food business is that you not only get to taste some delicious foods and travel to interesting places – you also get to meet some amazing, sincere and passionate people who become lifelong friends.

And if they are like the beautiful, charming and genuine Paula Lambert, you also get inspired to live your passion.

Thank you, Paula, for an amazing dinner!