In my job, I travel often. Mostly cross-country, for a few days at a time. Adjusting to the time change from West Coast to East Coast is not usually a big deal. I can get by with a little less sleep and a lot more coffee during my trip.

However, when I travel out of the country, I am always a bit stressed about how I am going to adjust when I arrive at my destination, so that I’m fully functional. And then of course, I have the same concern when I return home.

A few months ago, I realized that I was going to travel to South Africa and Dubai in mid-March, then head to New Zealand and Australia in late April. On previous trips, Advil PM was my friend, and I took a pill when I boarded my flight to ensure a good, restful trip. I oftentimes took one each night I was gone to be sure I slept.

However, I’ve read lately about the negative effects of Advil/ibuprofen (non-steroidal anti-inflammatory drug or NSAID) and decided I was no longer going to take them. So, what was I going to do instead, since both these trips were certainly going to challenge my ability to adjust quickly to a 9-hour and a 19-hour time change?

I had heard that many people take melatonin to assist them in adjusting to time changes when traveling. Melatonin is a natural hormone made by the body’s pineal gland. It helps your body know when to sleep and wake up. I had taken melatonin capsules before, but they never worked for me.

But I was determined to use a natural method to assist me with my sleep management. So, off to the natural food store I went. Sitting right next to the capsules were melatonin drops. I remembered hearing that when you let drops sit under your tongue, the body absorbs the active ingredient more quickly.

So, I bought a small bottle of melatonin drops. Then I remembered my orange-tinted, blue-light blocking glasses. One of the ways to wind down at the end of the day is to wear the glasses for about an hour before bedtime. When I’ve done that, I’ve found myself getting drowsy rather quickly. 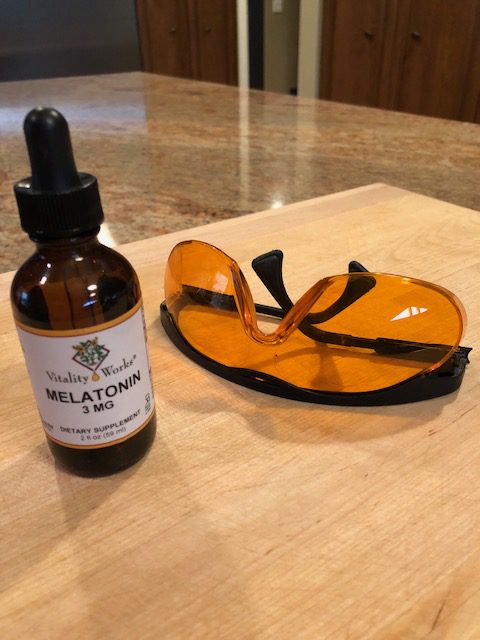 So, that’s what I packed on my first trip to South Africa. And they worked like magic. When I was ready to sleep, I put a few droppers worth of melatonin under my tongue, put on my orange-tinted glasses for about 30 minutes, and I quickly fell asleep. On my flight, I actually slept for seven hours! Each night during my stay in Capetown, I followed the same routine and I slept great the entire trip. I returned from Melbourne, Australia, this past Sunday morning feeling fully rested as I used the same routine during that trip too.

In case you’re wondering if this might work for you, I shared my routine with my co-worker Allen before he left on a business trip to Thailand. I checked with him when he returned and he was thrilled with what a difference it made in allowing him to sleep during his flights and adjust to the time change.

With so many of us exploring our bucket list by traveling around the world, I encourage you to order some orange-tinted glasses and get a bottle of melatonin drops. They will make your travels so much more enjoyable.