My quick trip to Berlin

I was heading to Berlin last weekend for Fruit Logistica — the largest produce trade show in the world. More than 2500 companies from 84 countries exhibited — only 35 from the United States.

But on Sunday morning, I found out that my flight to London had been cancelled. I decided to make the most of it. I let American Express find me an alternative flight to Berlin, which bypassed the snow and ice in England. I would be leaving a full 24 hours later, but that allowed me to spend the day with my youngest daughter, Sophia. That was an unexpected gift!

Then on my flight from Los Angeles to Frankfurt, someone had a medical emergency, so we had to make an unplanned stop in Halifax, Nova Scotia. My sister Jackie texted me that maybe I was not meant to go to Berlin, after all. But, I made the most of it, and made a new friend, Alicia, who was also traveling to Berlin.

We finally arrived in Berlin on Tuesday afternoon. 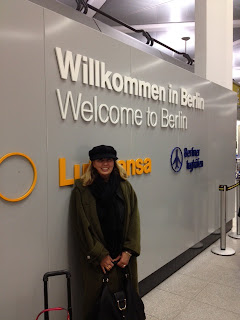 Since my company wasn’t exhibiting at Fruit Logistica, I was able to spend my time walking the 26 buildings (and the 2537 booths) looking for new products, new packaging ideas and all sorts of innovations.

Ten companies were nominated for product innovation awards. My personal favorites were Purple Sprouting Broccoli — colorful, but a little mushy when cooked; Angello Sweet Seedless Pepper — amazingly sweet and crunchy; and Achacha, an Amazonian fruit grown in Australia that looks like a loquat on the outside and a mangosteen on the inside.

Read about all 10 nominated products here. As you can see, some are not fresh produce – but packaging, processed products and juice and even an interactive website.

Trade show attendees are encouraged to evaluate and vote for the nominated products. My personal favorite was the Angello red seedless pepper. I can see it becoming successful once planted here in the states – it is much like the Veggie Sweets and Mini Sweets we have, but seedless. Being seedless is a big plus, and it would be great in restaurants for stuffing and grilling.

The final votes were tallied after I left Berlin on Friday afternoon – and I just checked online and the winner of the Innovation Award for 2012 was the Angello! I’m sure it was my vote that made it a winner!

So, was it worth spending two days flying to have two days at Fruit Logistica? Yes, and the best part was the personal connections I made. Conversations and connections turn into relationships that eventually become business.

By passing out my business cards to everyone I meet, I receive follow-up emails, connections on LinkedIn, followers to my blog, and eventually some new business relationships. I always strive to make the best of any situation, even if it means my flight is cancelled and my trip is cut short.

My only regret was that I had no time in Berlin to sight see! This was the fourth time I have visited Berlin for Fruit Logistica, but there never seems to be time for a tour of the city. (Read my post about the show two years ago.) I guess that’s a reason for me to go back in another two years.