Esquire Magazine and the Man Who Knows Everything

As you may recall reading in a previous blog post, when I travel I always purchase a magazine or two at my departing airport. I take special care to choose one that I would not normally read. I learned this technique more than 20 years ago from a speaker at a leadership conference. You’d be surprised at how much new information you will learn.

So last week, as I was departing for Berlin, Germany, for the Fruit Logistica International Food Show, I picked up Esquire Magazine.

I have to admit that seeing President Bill Clinton on the cover with the title, “Bill Clinton and 78 other things we can all agree on,” caught my eye.

I started my journey through Esquire by scanning the QR code on the cover. It said “Scan this for a message from President Clinton.” I used the RedLaser App on my iPhone to scan the code and watched a short video clip of President Clinton. 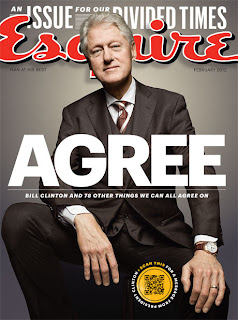 If you are uncertain about QR codes – here’s a quick tutorial. You’ll start noticing them everywhere!

To say that I devoured this magazine is an understatement. I read about actor Woody Harrelson. I read about Roger Craig, who won the most money ever on “Jeopardy!” and how he trained himself to learn everything. I read a hilarious story called “The Man’s Guide to Valentine’s Day.” But it was a story near the end that really grabbed me.

It is the story of Vivek Ranadivé, the CEO of the $4 billion software company, TIBCO Software, Inc. His personal goal is to harness the ocean of data in this world. And save civilization.

I could completely relate to the opening quote in the article: “If you take all the data that was generated from the dawn of man to, say, the day Barack Obama became president, that’s X. And then if you add up all the data that’s been generated since then, in just three years, that’s 10X. We are drowning in data.”

The article shared examples of how he and his company organize and make sense of all the data, so that the right information reaches the right place at the right time with the right context. Industry by industry. And coincidentally, he is also the owner of the NBA’s Golden State Warriors. They are a real live example of how he plans to leverage the data about the people who attend NBA games to provide a truly “WOW” experience, and to maximize sales for the NBA franchise.

But perhaps the most interesting part of this article was what Mr. Ranadivé has created: TopCom. He believes it will change the world.

TopCom is a private communications platform for the two hundred most powerful people in the world. It’s meant to be a kind of combination of Facebook, Twitter, e-mail, texting and Skype. A private social network, in this case, for world leaders.

Can you imagine the implications for achieving world peace or solving world hunger? Ranadivé actually gives an example in the article about how the Tsunami in Japan could have been handled differently which would have hastened rescue efforts and potentially saved thousands of lives.

The bottom line is that all of us are drowning in data. We all feel overwhelmed by our emails and just want to get our work done and our lives back to normal. It’s good to know that there is someone who can sort this all for us!

Here’s the article, if you want to read more:
http://www.esquire.com/features/vivek-ranadive-profile-0212