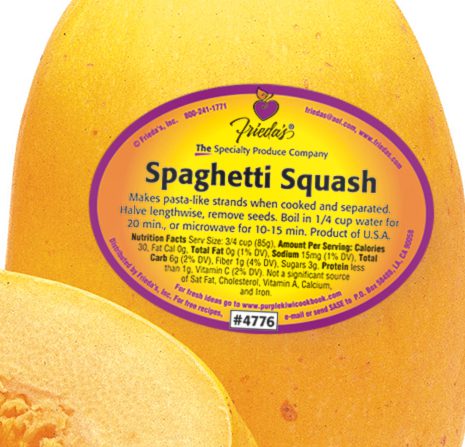 Spaghetti Squash has had a special place in my career at Frieda’s. It was the first product for which I developed a recipe, shortly after I started working full time for my mom. And that recipe ended up on the label adorning the millions of Spaghetti Squash we have shipped over the years.

In the late 1970s, a small grower shipped us 10 big boxes of what looked like giant yellow footballs. Spaghetti Squash, as it was known, had become a home gardening favorite because it was so easy to grow. It grew quickly and could be stored for months after harvest, thanks to its hard outer shell (unlike zucchini squash). The grower had planted many acres of this unique squash and called Frieda’s to help him market it. (BTW, many similar scenarios have played out at Frieda’s over the years — it’s how we get involved in so many new products. A grower starts producing something new with no plan on what to do when it is harvested, and then he contacts Frieda’s to do the marketing!)

And of course, what was so amazing about this new vegetable was that its flesh magically turned into spaghetti-like strands when you ran a fork through it (after cooking). The timing was perfect on our introduction of Spaghetti Squash. Weight Watchers had just started catching on in the United States, and dieters were tired of substituting cooked bean sprouts for pasta.

Voilà! Spaghetti Squash was the perfect pasta substitute. But, how to educate produce managers and consumers? Well, we had to label each squash, and of course, we needed an easy and simple recipe.

So, I went home to my apartment in Hollywood and opened up my refrigerator and pantry. With no extra time to go shopping, I created my first recipe! Not only was it easy to prepare, it was tasty, too. (Thank goodness microwaves were becoming commonplace in the 1970s. Cooking in the oven on a summer day was not desirable.)

I came to work the next day with recipe in hand. It went off to the label printer, and two weeks later we began shipping our first labeled Spaghetti Squash.

Now, fast forward to 2010, and you will find those “yellow footballs” available year-round in most produce departments across the United States. There are now many growers around the country who grow and ship Spaghetti Squash. Although you will find that most are labeled, sometimes it’s just the name and country of origin on the label. However, you will still find Frieda’s Spaghetti Squash label with usage instructions, nutritional information, plus our 100% satisfaction guarantee and our website, so you can get more recipes.

Here is my first recipe, which was also featured in my cookbook, The Purple Kiwi Cookbook:

Scrape the interior of the cooked squash with two forks to separate the pulp into spaghetti-like strands. Place in a large mixing bowl and reserve the empty shell halves.

Add the Cheddar cheese, zucchini, tomato sauce, salt, pepper, basil and garlic powder and mix well. Spoon the mixture into the empty squash shells. Sprinkle with Parmesan cheese. Place on a baking sheet and bake at 350 degrees for 20 minutes or until bubbly. Makes 6 to 8 servings. 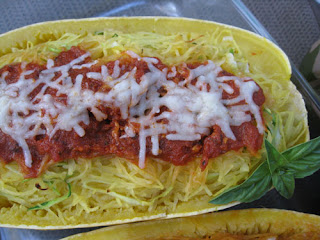 * (To cook Spaghetti Squash, place halves cut side up in a microwaveable dish with 1/4 cup water; cover loosely. Microwave on high for 7 to 10 minutes, turning dish a quarter turn every 3 minutes. Texture will be tender with a slightly crisp bite.)