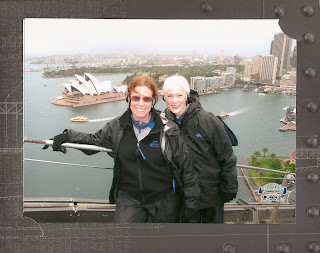 My daughter Alex did an internship this summer in Sydney, Australia. My good friend Michael Simonetta owns a wholesale produce company there and offered to employ Alex for six weeks. She had a great time and learned a lot while working there.

A few weeks ago, I had the good fortune to travel to Sydney for a business meeting. So I asked Alex, “Is there any special tourist thing that I should do while I am there?”

“You MUST do the Harbour Bridge Climb!”

I have to admit when I read that it was a 3½-hour-long adventure and that the cost was about $200, I was a little leery. I just couldn’t imagine spending that much time climbing a bridge. 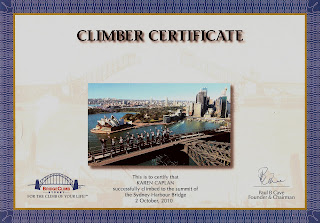 Well, now that I have my Climber Certificate and have experienced Sydney Harbour from 440 feet above the water, I can attest to what an amazing experience it is. We actually climbed the catwalks and ladders to the summit of this huge steel bridge – it was a fantastic view!

The actual climbing time was about two hours. Before the climb, tour guides spent about an hour getting us prepared for the trek. They dressed us in special jump suits, followed by wind pants, a jacket, a wind-breaker, plus gloves and a warm hat! It was a cold day! Next, the guides trained us how to use the radios and headsets, then they showed us how to use the harness belts while practicing climbing up and down the extremely steep ladders. This was a great workout, by the way. 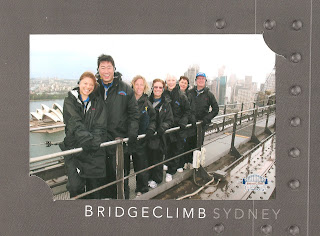 Finally, we were ready to start the walk. My tour group of seven people really enjoyed the experience. We stopped for photos, stories and amazing views many times during those two hours.

On March 12, 2010 they welcomed their 2,500,000th paying climber – quite an amazing feat! (Plus, in 2001 Paul received the Ernst & Young Australian National Entrepreneur of the Year Award for the “Business, Finance, Property and Services Tourism” category.)

So, put this climb on you bucket list. It’s definitely an amazing experience and provides a great view of Sydney Harbour and a bit of history on the country and the bridge.

P.S.
Did you know the Sydney Harbour Bridge is the largest and widest steel arch bridge in the world and was opened in 1932. You can read all about it here.